As many of you will know, I recently wrapped up The Cairo Deception, my 5-book World War II series.

One of the final chapters of the book depicts the Beatles performing in Hamburg, West Germany in December 1962. (I won’t go into more story detail than that, so as to avoid spoilers.)

This is actually true. When I discovered this lesser known piece of rock music history, I just couldn’t resist putting it in the book, as an Easter egg for Beatles fans.

The Beatles both resided and performed in Hamburg from August 1960 to December 1962. The Beatles’ Hamburg residence took place shortly before they became a global phenomenon. The band also performed at a music venue in Hamburg called The Star-Club, as described in Postwar: Book 5 of The Cairo Deception.

The Beatles of the Hamburg period involved a slightly different lineup of the band: John Lennon, Paul McCartney, George Harrison, Stuart Sutcliffe and Pete Best. After the group returned to England at the end of 1962, Sutcliffe and Best left the band, and Ringo Starr was hired on as the new drummer.

Click here to view THE CAIRO DECEPTION series on Amazon

The Nazis were evil; they weren’t always stupid. In some scientific endeavors, Nazi Germany actually surpassed the Allied Powers.

For example, one of the first things the Americans did, upon conquering Germany, was to scoop up a rocket scientist named Wernher von Braun. During World War II, Braun was a chief developer of the V-2 rocket program. (He was also a member of the Nazi Party and the SS.)

But after the war, the US faced new enemies. The American government brought Braun to the United States, where he worked on American rocket programs, with both scientific and military applications. Wernher von Braun had a hand in the Apollo spacecraft that would eventually lead to eight crewed lunar missions in the late 1960s and early 1970s.

That may not come as too much of a surprise to many readers. After all, most people know that Nazi Germany had some advanced weaponry. But did you know that Nazi scientists also raised the alarm over cigarette smoking long before anyone else did?

This historical curiosity provided a scene in Book Four of The Cairo Deception. 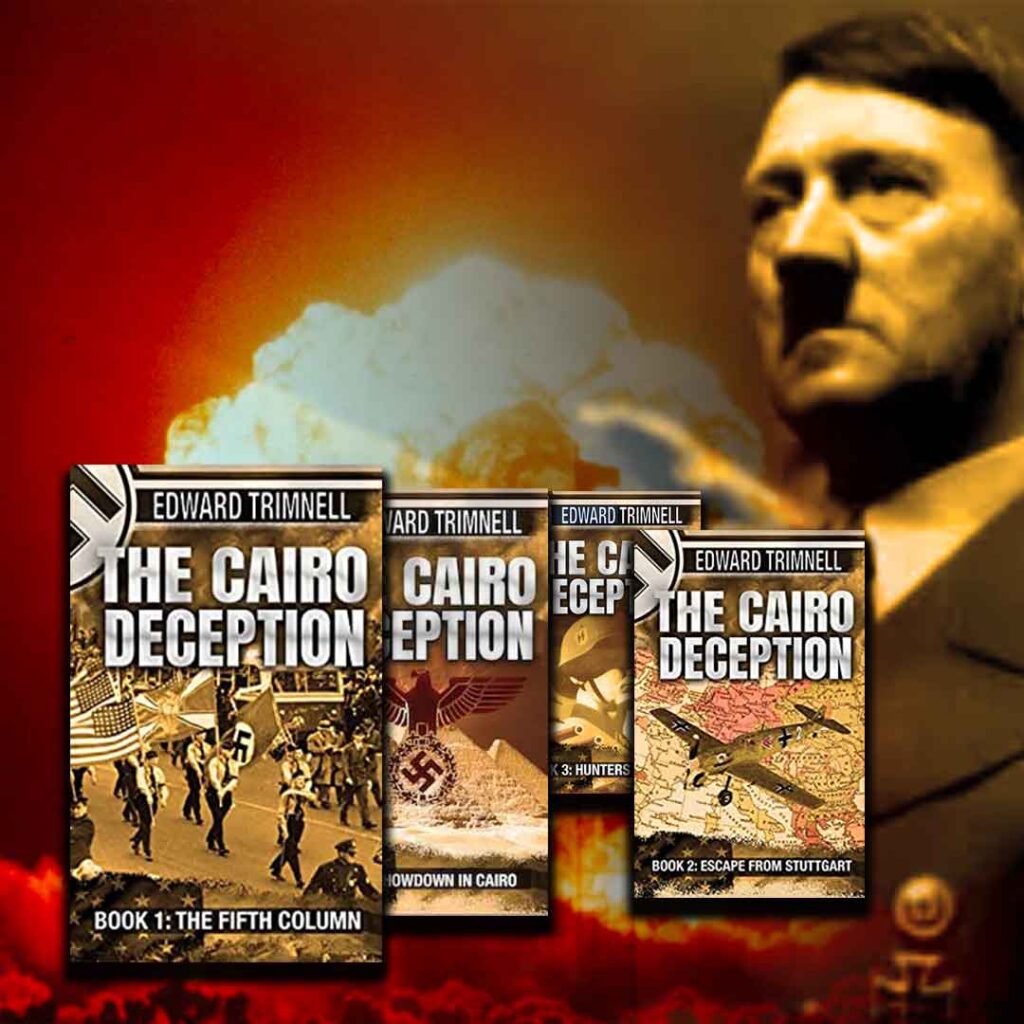 View THE CAIRO DECEPTION on Amazon

In Book Four of The Cairo Deception, Rudolf Schenk tells Jack McCallum that the Nazi government had identified cigarette smoking as a major health concern: a cause of heart disease, lung disease, and cancer. Jack  is skeptical; but on this matter, at least, Schenk is actually telling the truth.

The German medical community actively discouraged cigarette smoking decades before those of other countries, including the United States. Adolf Hitler (as noted in Book Four of this series) was personally opposed to cigarette smoking. Hitler was a teetotaler, too.

In this regard, Nazi Germany was ahead of its time, and in a good way. This must be kept in perspective, obviously. Nazi Germany’s prescience regarding the harmful effects of cigarette smoking was overshadowed many times over, by all of the evil that that government committed—both in Germany and elsewhere.

The fourth book in THE CAIRO DECEPTION series is now available on Amazon:

“Betty Lehmann travels to Cairo, and finally achieves her goal of participating in a mission for the Third Reich. But she may not survive the experience.

And even in Egypt, her past catches up with her.

Rudolf Schenk pursues the Vogels in Cairo. But there are new enemies standing in his way.

Jack McCallum is in Egypt seeking buried treasure and an easy fortune. Instead he finds a woman he cannot resist, who draws him into a Nazi plot.”

If you enjoyed the first three books, I think you’ll like this one, too.

(There is one more book in the 5-book series, and it’s in production now.)

View ‘Showdown in Cairo: Book Four of ‘The Cairo Deception’ on Amazon

SHOWDOWN IN CAIRO: Book 4 of THE CAIRO DECEPTION

What follows is a sneak peek at Chapter 6 of the fourth book in THE CAIRO DECEPTION, my World War II-era adventure/drama series.

The first three books of THE CAIRO DECEPTION are already available on Amazon.

In the excerpt below, Jack McCallum, a soldier turned treasure hunter, has made a discovery in the Egyptian desert outside Cairo.

The discovery could make him rich, set for life.

The gemstone was about the size of a plum. Jack picked it up from among the clay fragments, his heart pounding.

There were little images on one side of the stone, carved into its oblong surface. Jack recognized these as Egyptian hieroglyphics, too, though he had no idea what they said.

“Tahmid,” Jack said. “Do you realize what this is?”

It was unbelievable. This was the Garnet of Hatshepsut. Exactly as John Millhouse had promised.

Jack felt a sudden, not altogether unpleasant wave of dizziness. He paused for a moment, to take in the realization: He was going to be a rich man.

“Looks like you’ve struck it rich, boss,” Tahmid said, as if reading his mind.

Jack was distracted by the distant sound of voices, going back and forth in Arabic.

He looked up over the side of the hole.

There were roughly a dozen men, dressed in what approximated Arab bedouin attire. They had arrived on about as many camels.

They were about a quarter-mile away. At present.

Roughly half of the men were carrying rifles. The rifles appeared old, but they probably still fired. Several of the rifle-bearing men wore bandoliers criss-crossed over their chests. Many of the men were also wearing scabbards with what looked like long fighting knives.

Jack ducked down back into the hole. He raised a finger to his lips, in order to indicate that Tahmid should be absolutely silent. He pantomimed the presence of the men with his hands and fingers.

Tahmid took a cautious peek, as well. When he ducked down again, the man’s face bore an expression of abject terror.

“Thieves,” Tahmid said. “Like I tell you, the desert not safe place.”

“You said that it isn’t safe at night,” Jack countered. “This is the middle of the day.” Jack pointed upward, at the blazing sun.

“Sometimes dangerous during the day, boss. Better to stay in the city.”

Jack was tempted to ask Tahmid why—if he felt that way—he had hired on as a digging assistant to begin with. But that was a fruitless discussion that he had no time for.

His only concern now was those men in the desert. It was a dire situation. Those men would think nothing of murdering two treasure hunters in order to take the gemstone.

Jack thought back to his encounter in the alleyway, with the gang of eight hoodlums (led by the short man with the scar), and the advice of Rudy Gunther, who had literally saved his life that day.

Rudy had advised him to acquire a gun. Jack realized now that he should have taken that advice. But he didn’t know how much use a British Webley revolver would be, anyway, against a small army of armed men.

There was nothing to do but wait. The men were on their way to somewhere, obviously. They had stopped for a rest, or simply to look around, perhaps using the nearby pyramid as a landmark.

If they rode by here, Jack and Tahmid were goners. If they rode in another direction, they could probably escape.

Jack waited ten minutes. Hearing nothing, he looked up over the edge of the hole again.

The men were gone.

“How long till our ride meets us at the rendezvous point?” Jack asked Tahmid. Jack’s digging assistant took care of arranging their daily transportation. So far, he had done that with reasonable reliability and efficiency.

The rendezvous point was at the intersection of two poorly maintained macadam roads. The spot was out in the open. Completely exposed.

Jack didn’t think it would be advisable to go there now, and risk so much time at a vulnerable location. Not with the garnet in his possession, and with a roving band of thieves afoot.

“We’ll leave in one hour,” he told Tahmid.

He wrapped the garnet in a clean cloth, and placed it in his pocket.

An hour later, Jack and Tahmid set out with their sparse equipment for the spot where their transportation would be waiting.

They reached the spot, and Jack scanned the horizon anxiously. What if the armed men returned?

Then all was lost. But this was the last big risk. If he could make it back to Cairo, he would be set. Or almost set.

A short while later, an old Ford Model A came chugging into view.

The car was driven by two Arab men, who greeted Tahmid in Arabic, and nodded unsmilingly at Jack. They strapped the shovels and other equipment to the roof of the car. Then Jack and Tahmid piled into the back seat.

Jack remained acutely aware of the gemstone in the pocket of his trousers. This was the stone that—if he could hold on to it and get it out of Egypt—would change his life.

The Arab men chatted with Jack during the roughly half-hour ride to the edge of Cairo. Jack didn’t mind. By now he was used to people speaking a language that he couldn’t understand. (And Jack had all but given up on learning any Arabic.) Jack, moreover, was lost in his own thoughts; and he now had a lot to think about.

There was another matter, though. Jack knew nothing about these men in the front seat, or their relationship with Tahmid. What was to stop Tahmid from double-crossing him? Tahmid could tell the men about the gemstone, and arrange a robbery. Then they could plan to split the proceeds from the sale of the garnet among them. Never mind that a stone this valuable would be virtually impossible to sell in Egypt.

When he arrived safely back in the city, however, Jack felt guilty for his suspicions during the ride. True, Tahmid had been an unmotivated and lackluster employee. There was no indication, however, that he was dishonest or prone to criminal activity. Otherwise, Jack supposed, he would having joined the crew of the scarred gangster from the alleyway, or perhaps the men on camels whom they had seen today in the desert.

Get Book 1 of THE CAIRO DECEPTION

I’ve got a new series coming out, which you’ll be able to preview on Edward Trimnell Books:

In 1938, a rogue German physicist flees to Cairo to prevent Hitler from acquiring the atom bomb.

On his side are his rebellious daughter, and a restless American treasure hunter.

Pitted against him are a ruthless Gestapo agent, and a beautiful American woman with Nazi sympathies.

BOOK ONE: THE FIFTH COLUMN

It is summer, 1937, in the town of Dutch Falls, Pennsylvania.

Elisabeth “Betty” Lehmann is a 19-year-old woman who works in her family’s business— a small-town general store.

Oh, and she’s also a member of the German-American Bund, an organization that actively supports Nazi Germany and Adolf Hitler.

Betty is present at a Bund rally when unwelcome visitors arrive.