THE BUND RALLY, PART ONE

Nineteen-year-old Elisabeth “Betty” Lehmann squinted beneath the glare of the July sun. Taking in her surroundings, Betty was impressed, as always, at the spectacle her father had organized for the day.

More than a dozen swastika banners—red and white and black, fluttered in a trace of a midsummer breeze. The colors were resplendent in the glare of the hot afternoon sunshine. The banners rimmed a wooden speaker’s platform, a temporary structure that was stored in a barn when not in use in a Bund rally.

Betty stood amid a cluster of other young people, as everyone in attendance waited for the next speaker to take the podium.

Today’s rally was shaping up to be quite a success. The Führer would be proud, Betty thought, if only he could visit Pennsylvania. But that was an unlikely outcome, given the current state of relations between Washington and Berlin.

If not for the influence of the Jews, Betty’s father, Horst, often said, American public opinion would not be against us!

By “us”, Betty knew, Horst meant the greater German nation, the Volk. Betty and her two siblings, Frank and Heidi, had all been born in the United States. They were part of the Volk, nonetheless.

Residence and place of birth made no difference, so far as Horst Lehmann and his children were concerned. The Germans were one people, wherever they happened to be residing.

And at present, the Germans had but one leader: Adolf Hitler. 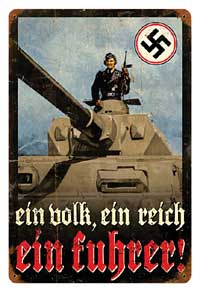 The next speaker was a man of about forty years of age, around a decade younger than Betty’s father. The speaker’s name was Fritz Julius Kuhn.

Fritz Kuhn had a strong Teutonic chin that seemed to accentuate his perpetual frown. He had heavy eyebrows and a prominent nose. Kuhn, too, was clad in a paramilitary uniform. But his was more elaborate than any of the others, and complete with a black, gold-trimmed garrison cap.

This was not to be the first time Betty would hear Fritz Kuhn speak, though the presence of the founder of the German American Bund was always something of an event.

There was hearty applause as Kuhn took his position behind the podium. Then there was total, respectful silence.

Kuhn paused, and tested the microphone by tapping it with the tip of his finger. A little electronic whine came from the adjacent loudspeakers.

“Heil Hitler!” Kuhn said, beginning his address. As he enunciated these two words, Kuhn raised his right arm, palm extended. Now widely known as the German salute, the gesture had originally been an innovation of the Italian Fascists.

Betty raised her arm, too, and repeated the words, “Heil Hitler!” Along with everyone else present.

The crowd answered in kind, with outstretched right arms. Kuhn waited a moment before continuing. As usual, Kuhn would speak in German. Practically everyone here had at least a basic command of the language, including those, like Betty and her siblings, who were first-generation Americans.

Kuhn himself had been born in Germany in 1896. He had emigrated as a young man, and received his American citizenship just three years ago, in 1934.

“Even here,” Kuhn said, his voice reverberating, “in the American heartland, the spirit of the German people is strong, as is the love for our Führer!”

This was met with cheers.

Yes, the American heartland, Betty thought. If someone were looking for a stereotypical American scene, then this would be it. They were just outside Dutch Falls, a small town about ten miles south of Harrisburg, on the eastern bank of the Susquehanna River.

The speaker’s platform had been placed in the middle of an untilled meadow. Pennsylvania forest enclosed the meadow on two sides. On a third side was a rural two-lane road.

On another side was the gravel parking lot of Lehmann’s Emporium, which Betty’s father owned, along with the adjacent land. The emporium was actually a general store, but her father had preferred the more grand-sounding word when he’d founded the business, more than a decade ago.

Lehmann’s Emporium was a family business. Betty, as well as Frank and Heidi, had put in many hours working there, right alongside their father. Betty’s mother, Claudia, had worked there, too, until her death five years ago.

The emporium occupied a warehouse-sized, wood-frame building. Horst was proud of the fact that his business was the largest retail establishment in the immediate area.

“I am so glad to see you young people, especially,” Fritz Kuhn continued. “Many of you, I know, have never been to the Fatherland. Yet you are the future of the Volk. The Führer has high hopes and expectations for you!”

Although the crowd ranged in age from roughly five to well past seventy, it did, in fact, skew younger. The Bund was run by men of middle age, like Betty’s father and Fritz Kuhn. But young people were by no means excluded. On the contrary, the German-American youth were actively encouraged to attend. As Fritz Kuhn had said, the movement was about the future, not the past.

A local young man named Stefan Schneider, who was closer to the podium, turned discreetly away from the speaker and smiled at Betty. This was not the first such smile or appreciative glance that Betty had received at the rally today. In fact, Betty had noticed many men—more than she could count—sneaking glances at her. Not just young men like Stefan, but men even older than her father.

Betty had shoulder-length blonde hair, high cheekbones, and blue eyes. Since the age of twelve, she had gone for almost daily swims at the nearby YMCA. This gave her a slender physique that was simultaneously strong and feminine.

Betty smiled and nodded back at Stefan, giving him just enough encouragement, but not too much. Make him put in some effort. Nothing excited men, Betty had learned, like uncertainty that contained a shred of hope.

Her brother, Frank, was standing a few yards closer to the platform than Stefan was. As if Frank had eyes in the back of his head, he turned and glared at Stefan, then gave Betty a disapproving stare, too.

Betty frowned back at Frank, but the damage had been done. Stefan’s friendly flirtation shifted to startlement and guilt, as if he had been caught in the commission of a crime. Stefan returned his full attention to Fritz Kuhn. Then Frank refocused on the podium, too.

Frank was four years older than Betty, but he guarded her virtue as if he were her father. Whenever a young man came near Betty, Frank would swoop in and discourage him. And Frank, being tall, broad-shouldered, and a known brawler, was able to dissuade most men once they realized he was serious.

There was something odd about Frank’s possessiveness, Betty thought. It was normal for an older brother to be protective of a younger sister…to a degree. But Frank was not her father. Frank acted almost as if—

No, don’t allow yourself to even think that, Betty. Surely Frank doesn’t—

Betty turned as she heard a commotion behind her: the sounds of automotive engines. Four automobiles had stopped in front of the meadow, and were now disgorging their human occupants, who were carrying signs.

The crowd began to murmur among itself. The rally-goers were puzzled at first, then actively annoyed.

Betty was aware of movement closer to the platform. Frank was walking toward the road, his face red with anger.

“It’s that Jewish son-of-a-bitch, Barry Rosenberg!” Frank shouted at anyone within earshot.