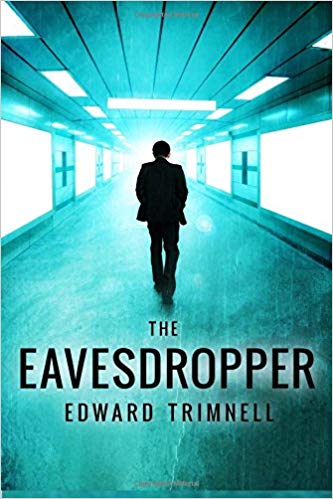 Five o’clock couldn’t arrive quickly enough for me that day. Ordinarily, I lingered at my desk for a while. Not today. I was walking out the main entrance by 5:05.

I drove home in a semi-haze, trying to organize my thoughts.

Ellen Watson had done me few favors, of course. She seldom gave me anything but pro forma politeness, and she occasionally sided (however subtly) with Donnie and Bethany in their perpetual maneuvering against me.

But those were the petty slings and arrows of office politics. If her life was potentially in danger, I had to do something.

The question was: Did what I had heard amount to a confession? If I went to the police, would my account of a conversation overheard through a wall be regarded as “actionable”?

Some problems are so big, that you just have to set them aside and let them stew for a while. This is what the Japanese refer to as “putting a problem in a box.” I knew, of course, that I couldn’t put this problem into a box—not really. I would be thinking about what I had overheard in that meeting long into the night.

But there was something else on my mind. I was going to call my ex-wife in Dayton so that she could put my daughter, Olivia, on the phone.

I waited until around 7:00 p.m., as I knew that Claire would kvetch if I interrupted her during the after work/dinner preparation rush. She answered my call on the third ring and said hello, just like normal. There was no immediate indication of our earlier quarrel about Ryan, and the possibility of Ryan moving in with the two of them.

I wondered, naturally, if Ryan was there now, but I didn’t ask. My past experience told me that if Ryan was around, I would find out soon enough.

“I guess you’d like to talk to Olivia,” Claire said. At least she wasn’t going to make me beg.

Our daughter was now four years old, and she had long since passed that somewhat amorphous stage of infancy and toddlerhood, where all children are more or less alike (at least from my troglodyte perspective). Olivia was now acquiring her own distinctive personality. And every conversation with her—every meeting with her—was a sheer joy that I looked forward to well in advance.

As we were talking on the phone, the sour thoughts invaded: If Claire and I were still married, there would be no custody agreement that gave me limited access to my daughter. I could see Olivia was much as I wanted.

I pushed those thoughts away. Olivia was telling me about her day in the Montessori program, her explanations punctuated with giggles here and there.

I was talking to my daughter when I heard a new sound in the background: the television. It was loud enough so that I could discern the program, more or less: definitely a sporting event. Given that it was January, my guess would have been college basketball.

I knew that my ex-wife avoided spectator sports of any kind. Therefore, Ryan was in her condo now, watching TV.

In the same room with my ex-wife, and my daughter.

The volume of the television was so loud that I now struggled to communicate with Olivia. When I had to repeat myself twice to make Olivia understand me, I finally said: “Hey, sweetie, can you put your mommy back on the phone, please?”

Olivia handed the phone back to Claire.

“What’s that TV in the background? I never knew that you were a college basketball fan.”

A sigh. “Ryan stopped by tonight. He’s watching the game.”

“Yeah, well, Ryan is damn inconsiderate. He also seems to have a hearing problem, based on how loud he has the volume turned up.”

“Okay, Frank, I didn’t know you were going to be so difficult about this.”

“‘Difficult’ about which part? Having that nitwit around our daughter, or his being inconsiderate and hard of hearing?”

“Stop it. Listen: I’ll just take Olivia into the bedroom, and you can talk to her in there.”

Her mention of the bedroom brought unwanted images of another kind, images of her and Ryan.

“See? You can’t hear either, as loud as he has that television turned up. I said I want to talk to Ryan.”

During the time that she had been with Ryan, Claire had taken some pains to make sure that our paths never intersected. I had seen photos of him on Facebook, but I had never met the guy, never spoken to him before.

I had apparently caught her off-guard. What was she going to do? Ryan was right there and I was asking—demanding, really—to talk to him.

“What?” I heard a male voice—Ryan—say from the other side of the room. I surmised that Claire must have looked in his direction.

“Frank says that he wants to talk to you.”

After a pause, Ryan said, with an edge in his voice: “Okay, let me talk to him, then.”

“Hold on,” Claire said, exasperated. There was the muted bump of the phone being handed over.

“Hey, Ryan, buddy? This is Frank.” I knew that my words were laced with sarcasm, of course. But at that moment I didn’t particularly care. I was annoyed at Ryan’s inconsiderateness, and dismayed by the larger significance of his presence.

On top of all that, I couldn’t rid my mind of what I had overheard at work earlier that day. I had to decide what to do—or Ellen Watson’s death might well be on my hands. I was juggling too many balls; I was tense from too many conflicting emotions.

“I know who you are,” Ryan said. There was no mistaking the slight contained in that simple sentence of understatement.

“Well, then, perhaps you wouldn’t mind turning the television down. I appreciate that you enjoy your sports and all, but I was trying to talk to Olivia. My daughter.”

“First of all,” Ryan said, “The television isn’t that loud. Secondly, I heard Claire offer to take Olivia into the bedroom, where you wouldn’t be able to hear the TV at all. That seemed to me like a perfectly reasonable solution, but you turned it down flat, upsetting Claire, Olivia, and me in the process. I sense that there’s something else wrong, here, Frank.”

In that instant I may have literally seen red. How dare that interloper invoke the name of my daughter.

As calmly as I could, I said, “How about you just turn the TV down to a reasonable volume, so that isn’t necessary, Ryan? Better yet, you could go watch the game at your own place.”

I was being transparently petty now, but I didn’t care.

Ryan sighed. “All right. I’ll turn the television down while you finish your phone call. Way down, in fact. But I’m not happy about you going out of your way to disturb my girlfriend—”

“Listen, you—” I began, but Ryan had already handed the phone back to Claire.

“Ryan is turning the television down now, Frank. Way down, just like he said. Are you happy now? Here, I’ll let you finish your conversation with Olivia.”

Claire put Olivia back on the call, and I did my best to get through the rest of the call in an appropriately cheerful manner. I was ever mindful that Olivia had not asked to be born to two parents who would divorce within a few years after she was born. Nor did she have any fault in the matter. I wondered how much she perceived of the tension between the three adults who were now in her life—for better or worse—and if her childhood years were going to be a war zone because Claire and I had never worked out our issues.

Afterward, I returned to the solitude of my bachelor apartment. In some corner of my mind, I had been thinking that a display of jealousy would show Claire that I still cared for her. That had obviously backfired: I had come across as insecure—and Ryan had won the confrontation.

I should probably take a moment to tell you what happened to our marriage. It won’t take any longer than a moment, because I’m not really sure myself.

Claire and I met at at a local bar at a happy hour when we were both in our early twenties and right out of college. We both fell for each other, but I think it’s fair to say that I fell harder.

The first time I proposed, she told me that she wanted to wait to get married, that there were still things she wanted to do before she settled down: She wanted to live for a time away from Ohio—maybe in California. She was thinking about going to graduate school. Or maybe she would teach English in Japan.

I interpreted her vague wish list as a simple lack of maturity, a failure to acknowledge that her childhood had ended. So I gently prevailed on her about getting married—and I finally wore her down.

That was the way we got married. Then Olivia came along, somewhat unexpectedly. Claire loved our daughter, but she wasn’t ready to be a mother. Nothing ties you down like a child—in ways that are wonderful, as well as not so wonderful.

To be fair, Claire never aimed any of her resentment at Olivia; she directed it at me. Suddenly it seemed that I couldn’t do anything right in her eyes. Feeling under fire in my own home, I suppose that I sometimes responded in kind. Like Claire, I was still in my twenties and I had a lot of growing up to do.

To make a long story short, Claire filed for divorce when Olivia was not yet three. We’re both entrenched in Ohio now, for better or worse. Neither of us is going to California, or Japan, or to graduate school anytime soon.

Reflecting on the way our marriage ended, I often wondered: Should I have simply let her go, when she told me that she wasn’t ready to get married? You could certainly make the case that early capitulation would have been the better choice, for everyone involved.

Before today, my failed marriage had presented my life’s most difficult questions. Now I faced a new question, on an entirely different scale of difficulty:  What was I going to do about the imminent “elimination” of Ellen Watson?

Get the complete book on Amazon