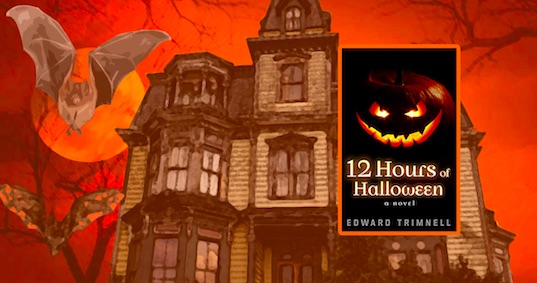 We had walked perhaps an eighth of a mile when we heard the voices, and the sucking sounds.

It sounded like someone was digging holes in the muck of the surrounding front yards. In and of itself, that was not a particularly terrifying sound, but it had no logical explanation.

The voices were another matter. They were approximately human, but their words were as yet indistinguishable.

“Help me!” I heard one of the voices cry out. Then another plea for rescue. But rescue from what?

The three of us paused in the middle of the street.

The formerly grassy spaces of the surrounding yards were churning—with mud, and with human bodies that were struggling to reach the surface. We could see hands, torsos, and faces that were still mostly caked with mud.

Just a few paces from us, the body of an elderly woman broke through the mud. She was wearing a formal dress—the kind of dress that she might have been buried in—and half the skin on her face was gone. Her fingers, grasping toward us in the night air, were skeletal.

“What the hell?” Bobby cried out.

I understood, as I had been the one to intuitively understand so much of what had happened over the past several days. These were the restless dead who were coming back for the night. The dead who were not content to move on, the dead who still craved life and the living.

As more of the bodies worked their way free, we could see that most of them were adults—presumably older adults. (It was impossible to discern the death ages of many of them, rotted as they were.) But there were also some children among them—youths our age and younger, who had been prematurely culled from the ranks of the living. They were especially insistent in their pleas to us.

So far, none of these undead had managed to pull or push completely free of the earth that bound them. They did not seem to threaten us in the same way that the bear did (and as other entities would, before the night was over), but there was something about their insistence that might have overwhelmed us.

At the age of twelve, I was only just beginning to understand the nature of my life force, how the desire to live, interact, take, and give impelled me. I was at the beginning of that journey, and these wretched creatures clawing their way through the mud had long since ended it.

They weren’t evil, but they were jealous of us; they would have to be. They had once been like us, and look at them now.

If they managed to break free and reach us, what would they do? Would they let us escape easily?

Bobby and Leah both stood speechless and transfixed by the writhing bodies and their unanswerable, groaning pleas.

I dropped my bag of candy in the street, absently noticing that Bobby and Leah had also dropped theirs. I grabbed both of them by an arm nearest me.

Once again, Bobby and Leah did as I directed them. It did not take us long to move past the yards filled with corpses. They comprised no more than two or three lots on either side of us.

“What was that?” Bobby asked, shaking his head in disbelief. Bobby still couldn’t force himself to believe all of this. The evidence, however, was now far too compelling for him to seriously propose that it was all some sort of an orchestrated hoax, or our collective delusion.

“We’ll talk about it later,” I said (though as I now recall, we never actually did). The cries of the grasping dead could still be faintly heard behind us, and their plaintive demands for help—for a share of the living force that each of us carried inside—had unnerved me. I wasn’t ready to talk about this with others yet. I was still processing it.

But I wouldn’t have much time to think. The houses and yards surrounding us were looking normal again. The national election being only days away, evidence of the contest was all around us. Even Halloween could not drown out politics. To the right of us, a green sign declared: “Reelect Carter and Mondale: A tested and trustworthy team.” On the other side of the road, a competing sign exhorted: “Ronald Reagan for President: Let’s make America great again.” I wondered, vaguely, as a distraction from my fear and my weightier thoughts, if these two across-the-street neighbors maintained friendly relations despite their political differences.

These ruminations were interrupted by the utterance of my name, and an all-too-familiar curse word.

“Jeff Schaeffer, you pussy. There you are.”

I looked around to see Matt Stefano standing in the middle of the road with two of his friends—Steve Wilmert and Tony Sparks. I was briefly back in the “normal world” now, and I might have been glad of that. Except that my version of the normal world was also inhabited by Matt Stefano and his friends.

Matt, Steve, and Tony had made no concessions to the holiday. They were not wearing costumes, and they were carrying no bags for gathering candy. They were clad in their usual afterschool outfits: faded and frayed blue jeans, denim jackets, and tee shirts.

I noticed a bulge in the breast pocket of Matt’s jacket: The switchblade, no doubt. Of course: I had seen him take it out only a short while ago.

The three of them assessed the three of us with expressions of open disdain, exchanging sneers with each other.

“What are you and Nagel supposed to be,” Matt asked me, “a couple of faggot pirates?”

I considered letting the comment pass. There was really no fitting response. And we probably did look ridiculous, decked out as we were.

But Leah was there. Two things about tonight: I had already been through a lot (though, unbeknownst to me, much still lay ahead of me), and I had made some real progress with Leah. She had held my hand, after all.

And I wasn’t going to allow Matt to ruin that—whatever the consequences.

“’Just let us pass!’” Matt mimicked in a falsetto. This prompted the expected laughs from both Steve and Tony.

Matt took several steps closer to us—closer to me, in particular. I was now distinctly conscious of the five or six inches of Matt’s height advantage. He was nearly a full head taller than me. I didn’t want to even speculate on his weight advantage—probably thirty pounds, at least.

“Tell me, Schaeffer,” Matt said slowly. “What if I decide that I don’t want to let you pass, huh? What’s your plan then? You going to hide behind Nagel? Or maybe your girlfriend here?”

Matt’s last remark caused an anger to flare within me. I did want Leah to be my girlfriend, of course. But strictly speaking, she wasn’t yet, and Matt’s sarcastic preemption of the idea might dash everything.

“It doesn’t look like you came alone, either, Stefano,” Bobby observed.

“Okay, then,” Matt allowed, nodding. “How about it, Schaeffer? Just you and me—man to man. Are you up to that? Or are you too much of a pussy?”

Stefano had placed me in the ultimate catch-22. A fight between Matt Stefano and me would be grossly unfair: He had numerous and decisive advantages in size, age, and experience. I had been in only a few fisticuffs in my entire life, and they had been childhood affairs—scuffles on the playground in the fourth or fifth grade. Matt Stefano, based on his age, should have been a high school kid. And he would fight like a high school kid.

On the other hand, I could not back down without admitting that I was afraid of him—which I was, despite my flashes of bravery and leadership tonight.

“Don’t do it,” Bobby said to me, in a sotto voce whisper. “You don’t have to fight him. And the truth is—you can’t win that fight.”

“Shut up, Nagel!” Stefano said. Matt was about to shove Bobby when we all became aware of another presence on the street.

It was the ghost boy. He had interposed himself between Matt and his two friends. I can’t say that I was glad to see him—not after seeing evidence of his true nature. But I was at least somewhat grateful for the distraction.

“Who are you?” Matt challenged, whirling on the ghost boy.

I thought: Matt thinks he’s a normal kid. I expected Matt to resort to his tough guy routine. Then the ghost boy would turn into something horrible, and Matt would run shrieking away. Maybe the ghost boy would do even worse to Matt. At that moment, I wouldn’t have objected.

That wasn’t what happened, though. The ghost boy began talking to Matt and his two accomplices, in a low murmuring voice that was almost inaudible from where Leah, Bobby, and I stood. I saw Matt’s posture relax. Tony and Steve relaxed, too.

The ghost boy stopped talking and pointed to an unseen location behind us. Matt and his two friends suddenly broke ranks, and all three of them walked around and past us. Leah, Bobby, and I might have been trees or fence posts.

I briefly looked over my shoulder to watch them go. They didn’t even glance back at us. They were gone. We had escaped—or maybe we had been saved.

The three older boys had walked in the direction of the groaning, pleading undead. I wondered if they would encounter the apparitions, too. Then I decided that no, they probably would not. Matt, Tony, and Steve were not among my companions, so they would be unaffected by the curse.

The ghost boy stared directly at me and said: “Don’t be thinking that I saved you. He might take you another night—if you live that long. But tonight you’re ours. If you live through tonight, he can have you, for all I care.”

The ghost boy turned away and walked into one of the adjacent yards. We all saw what happened next: When he passed by the trunk of a large tree, his body dissolved into a smoky ether; then that was gone, too.

Leah sighed aloud, shaking her head in disbelief at all that she had just experienced. Her body was quivering, even though it wasn’t all that cold yet. I was going to say something, until I noted that Bobby and I were trembling too—a delayed reaction, I supposed.

Leah looked to Bobby, and then to me. “What the—” she began.

“Later,” I said. “We’ll talk about it later. Right now, we need to keep walking.”

And so we did.