I remember sitting in a cinema one day in the early summer of 1977. I was just shy of nine years old, so I was there with my dad.

I didn’t really know what to expect, but my dad (then barely in his thirties) was excited about it. So I went along, too. My mom had no interest the movie. (My mom liked very few movies that didn’t involve horses.)

I remember watching the opening scenes. The big spaceships on the big screen. Oh, man, I was immediately hooked.

I know: this essay has already veered into cliché. By this point, everyone has seen those scenes in the original Star Wars movie. The CGI effects in 21st-century movies like Avatar, moreover, have since surpassed our collective ability to be visually amazed.

But keep in mind: in 1977, the average feature film was a Burt Reynolds movie that relied on conventional car chases. (In fact, one such movie—Smokey and the Bandit—was released within a few weeks of Star Wars.)

Most of the available science fiction in 1977 was campy and already a decade old. There was Star Trek, of course. But Star Trek was made in the 1960s, and it showed in the production values.

There was also Lost in Space, which had its original prime-time run between 1965 and 1968. (Oh, and the first season of Lost in Space was in black and white.)

I won’t tell you about Star Wars and how it was different because well…you already know. But you might not know what it was like to be part of the first Star Wars generation.

To truly get that, you have to have been there.

America in the 1970s was an unsettled place. The country was on a hangover from Vietnam, the counterculture, the 1960s, Watergate.

Many of the Baby Boomers, then at the peak of their childbearing years, were trying to reconcile parenthood with all the Me Generation stuff.

I should note that my parents were the exception in this regard. I had wonderful parents and—on the whole—an idyllic childhood. But my childhood was the exception. This was an era of small families, divorce, and adults working in parenthood as an afterthought. The 1970s was not a child-focused decade, on the whole.

This showed up in the marketplace. Corporate America didn’t put out much entertainment for children, because the demand wasn’t there, like it was from the mid-1980s onward. For most children, circa 1976, Saturday morning cartoons (mostly reruns from the 1960s) were the highlight of the week.

But then there was Star Wars. If you were a kid in that era, Star Wars was not just a movie, but a way of life…or a way of play, anyway.

Publishers cranked out Star Wars trading cards and comics. Toy manufacturers rushed light sabers and action figures to market. There was always something new to buy…or to beg your parents to buy.

Burger Chef, a now defunct fast food chain, issued a set of Star Wars posters in 1977. Each one was given away with the purchase of a double hamburger meal, or something like that. I talked my parents into acquiring all of them.

My bedroom became a shrine to Star Wars. My room contained not just the posters, but all the paraphernalia I could acquire.

I’ve watched the more recent Star Wars movies. I know that the last few have been controversial among longtime fans. I’m not interested in wading into that debate. For me, the first three movies—Star Wars (1977), The Empire Strikes Back (1980) and Return of the Jedi (1983) are the only three “canonical” ones, anyway.

These three films traced the end of my childhood, effectively. I was nine when the first one came out. When Return of the Jedi hit the local cinema, I had completed a year of high school.

But this is about more than mere nostalgia. In recent years, the culture wars have invaded science fiction, superhero comics, and whatnot. There was little appetite for that in the late 1970s and 1980s.

Why? That era was already full of gloomy, abstruse movies that were overloaded with “message” and “issues”. And in the 1970s, the issue du jour was the Vietnam War, which was still very much in recent memory.

And so we got turgid, barely watchable films like The Deer Hunter (1978), Taxi Driver (1976), and Apocalypse Now (1979). In 1978, I remember hearing a news story about a Vietnam vet shooting himself at a screening of The Deer Hunter. That movie is incredibly gloomy and depressing to watch, as are the other two. (And the Jodie Foster scenes in Taxi Driver, in which she plays a child prostitute, are downright bizarre by today’s standards.)

The original Star Wars trilogy had a relatively diverse cast. It wasn’t all white males in the spotlight. Who can imagine Star Wars without Carrie Fisher, after all? And the third movie of the original trilogy made a major star of Billy Dee Williams.

And yet, Star Wars didn’t ask audiences to engage in endless navel-gazing about race and gender. (These matters now greatly preoccupy the fandom of science fiction publishing, but that’s another “issue” for another time.)

The original three Star Wars movies were simply fun. They weren’t controversial. They didn’t try to change your worldview or your politics. Practically everyone liked them. (Even my mother relented and saw the second and third Star Wars movies, despite their lack of horses.)

And if you were a kid in the late 1970s, Star Wars was larger than life.

I’ll close with a blunt assertion: I think it’s high time for the film and comics industries to retire the franchise. To put this in perspective: I was not quite nine when the first movie came out. I’ll soon be fifty-three, and they’re still riding the Star Wars wagon, trying to squeeze a few more million out of the original story concept.

But who cares what I think? Maybe I’ll see the next Star Wars movie, and maybe I won’t. It’s not like I’m boycotting them. But like I said: for me, the first three are the only ones that really count.

Although most of what I write can be classified as neither science fiction nor fantasy, I’ve been a faithful weekly listener of the Science Fiction and Fantasy Marketing Podcast for about three years now.

Joe Lallo, Lindsay Buroker, and Jeff Poole never fail to provide good insights on the art and business of writing.

This past week, they announced that they would be “taking a few months off”.

That of course leaves the door open for a return. If the history of other podcasts, blogs, and YouTube channels is a guide, however, “taking a few months off” is usually synonymous with quitting for good.

I shall be sorry to see them go. Nevertheless, I can understand if their hearts are no longer in the endeavor.

I was part of the original Star Wars generation.

I remember being nine years old in the summer of 1977, sitting with my dad in the cinema, watching that first epic Star Wars opening crawl.

Among my favorite Star Wars memorabilia of that era were the four Star Wars posters issued by Burger Chef. (Burger Chef was a once popular fast food chain that went out of business in 1996.)

I had all four posters, and they were hung all around my bedroom. (I can still recall the exact placement of each one, in fact.)

These are now collectors’ items, of course. But they were just delightful children’s bric-a-brac in 1977. 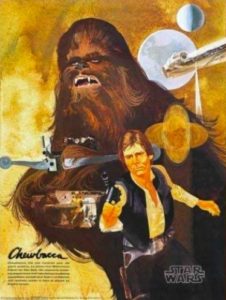 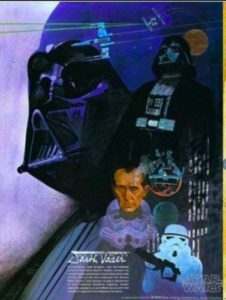 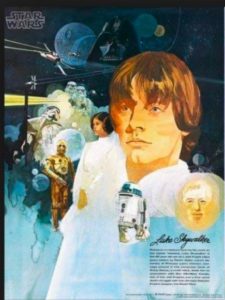