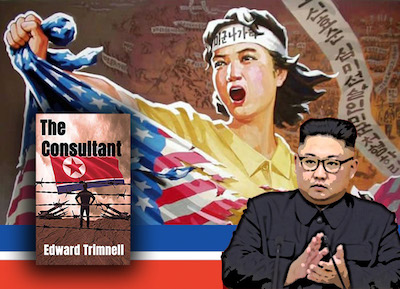 The writing of THE CONSULTANT.

Here’s a little about the story, and why you’ll enjoy it if you like a.) East Asian settings, and b.) adventure.

In my prior professional existence, I was deeply involved with Japan. I learned the Japanese language, and even worked as a translator for a time. I also worked for years in the Japanese automotive industry. I made many trips to Japan.

One of the ongoing issues I learned of in Japan was the so-called ratchi mondai 拉致問題, or “abduction problem”. This intractable matter came up whenever there was talk of Japan and North Korea resuming ordinary diplomatic relations.

Throughout the 1970s and part of the 1980s, North Korean agents abducted numerous Japanese citizens on Japanese soil. (Japan and North Korea are quite close, geographically.) These ordinary Japanese people, who happened to become targets of the North Koreans, were taken to North Korea and forced to work in a variety of capacities. Many were employed against their will as Japanese language instructors.

North Korea’s abductions didn’t stop there. In 1978, North Korea abducted Shin Sang-ok and Choi Eun-hee. Shin Sang-ok was a well-known South Korean movie director. Choi Eun-hee, his former wife, was a successful actress. The pair spent about eight years in North Korean captivity. They worked directly for Kim Jong-il, the future Supreme Leader of North Korea. Shin and Choi were tasked with making films for North Korea’s movie industry (against their will, of course.) They finally escaped in 1986.

But why couldn’t it happen? After all, thousands of Americans travel to Japan and South Korea every year. Many are skilled business and technical experts, human assets that Pyongyang would surely covet. And North Korean agents are known to be active in both Japan and South Korea.

An American abducted and taken to North Korea

THE CONSULTANT is the story of Barry Lawson, a successful business consultant from Chicago who finds himself in the wrong place at the wrong time.

And then he finds himself in North Korea.

Barry Lawson is an aging Lothario in his late forties. He has a way with the ladies, and this has often gotten him into trouble. Barry is divorced, with two children.

When Barry is approached by an attractive woman at a bar in Osaka, Japan, he can’t resist….even though he knows better.

This is a decision that he’ll soon regret. Within hours, Barry Lawson, successful business consultant and ladies’ man, must find a way to survive in—and hopefully escape from—the hellhole that is North Korea.

He’s not the only foreigner there, though. Barry he meets a Japanese man, Shoji Tanaka, whom the North Koreans abducted from Hokkaido (in northern Japan) when he went out for cigarettes one night.

Barry also meets Anne Henry, a woman who knows the Korean language. Anne, it turns out, has a traumatic abduction story of her own.

That’s all for now. I don’t want to ruin the book for you.

THE CONSULTANT is available in paperback and Kindle. (An audiobook is in the works.) You can presently read THE CONSULTANT in Kindle Unlimited, as well.

Want to preview THE CONSULTANT? You can do so below.