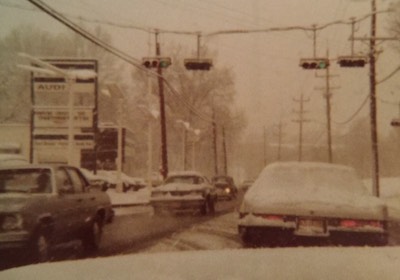 This past week two consecutive winter storms dropped more than a foot of snow on Cincinnati. I managed to shovel two driveways, twice, without a.) throwing out my back, b.) re-repturing my 2005 hernia, or c.) having a heart attack. At my current age of fifty-two, I consider that a not unnoteworthy accomplishment.

The winter of 2020 to 2021 has been a rough one so far in Cincinnati, especially compared to the past three or four. Yet more snow is forecast to arrive later this week.

Of course, for American adults around my age—especially if they grew up east of the Mississippi—there are two childhood winters that stand out in memory: those are the back-to-back “blizzard winters” in the mid-1970s: the winter of 1976 to 1977, and the winter of 1977 to 1978.

The winter of 1976 to 1977 was the winter of record-breaking, pipe-bursting, river-freezing cold. Here in Cincinnati, there were three straight days of record cold in January 1977, in which the temperature stayed below minus 20 degrees Fahrenheit the whole time.

The Ohio River froze solid—for the first time since 1958, and only the thirteenth time on record. In the Cincinnati media archives, there are photos of people walking across the Ohio River, and even driving across the ice that month. The freezing of the Ohio was quite a novelty, much talked about on the local news. One of my older friends has told me about driving his car across the Ohio River that winter on a dare. He was then nineteen years old, and he’s now in his sixties. So he obviously made it across.

January of 1977 was also a snowy one. Cincinnati had 30.3 inches of snow that year. (The usual figure for Cincinnati in January is six inches.)

The following winter of 1977 to 1978 was just as bad, with almost as much cold, and even more snow. On January 25, 1978, one of the worst blizzards in U.S. history pummeled Cincinnati with almost seven inches of snow. There were already fourteen on the ground.

I remember the night of January 25, 1978 well. I played forward on our fourth-grade basketball team. That night we had a game at a rival Catholic school in the area, Guardian Angels. I remember walking outside at halftime with other members of my team. The air was not exceptionally cold yet by January standards. (It would soon plummet below zero degrees.) But there was a strange fog in the air. I think we all had the feeling that something momentous was imminent. On the way home from the game, the snow began. By morning, it was a whiteout.

Winter landscapes of the memory

At the age of eight or nine, one doesn’t have much life experience to draw upon. I could sense, though, that those two winters were worse than the handful of winters I could recall before. During those two winters, the outside air always seemed to be bitterly cold. Furnaces ran constantly. Fireplaces crackled nonstop. The ground was always snow-covered.

Many people are depressed by snow and cold weather, and winter in general. Not me. I will confess that some of my happiest childhood memories are winter ones, in fact.

I was particularly close to my maternal grandparents. During those blizzard years of the 1970s, they lived just down the street from us. When school was canceled due to inclement weather, I got to pass the day with my grandfather, who had recently retired. We spent a lot of time together in those years. I’m grateful for all the snow.

The cyclical nature of winter weather

It has been my observation that bad and mild winters tend to alternate in cycles. From the mid-1970s through the early 1980s, the winters were harsh, with record cold and snow.

The winter of 1981 to 1982 was cold. The Cincinnati Bengals went to the Super Bowl that year. On January 10, 1982, the Bengals won a key home game against the San Diego Chargers. The air temperature at Cincinnati’s Riverfront Stadium on game day was minus nine degrees, with wind chills down to 35 below. That game has gone down in NFL history as the “Freezer Bowl”.

I was in the eighth grade in 1981-1982, and going through a (brief, in retrospect) rebellious adolescent phase. This included hanging out with an edgier crowd, and embracing a short-lived fascination with smoking cigarettes and drinking alcohol.

Even in 1982, smoking and drinking weren’t acceptable pursuits for eighth graders. But hiding these illicit activities from adult authority figures was half the fun. I have many memories of shivering outside that bitter January, as I sipped a furtive drink of whiskey, or smoked a Marlboro. Even today, when I happen to smell someone else’s newly opened pack of cigarettes, or taste an alcoholic beverage, I’m transported back to that brutally cold winter of 1981 to 1982.

The last bad winter I remember from that larger cycle was the winter of 1983 to 1984. That winter brought record cold and snow to the entire United States, including Florida and Texas. As I recall, there was a lot of anxiety about the citrus crop that year, and skyrocketing prices of orange juice.

Over Christmas break in December 1983, my parents decided to embark on a rare family trip to Florida. When we reached Macon, Georgia, it was 4 degrees, with 23 degrees forecast for our destination in the Sunshine State. After spending a night shivering in a Macon hotel room with an inadequate heater, my parents decided to cut our losses. We headed home the next morning. We could freeze in Ohio for free, after all.

But the weather is no more constant than anything else in this world. That cycle of severe winters, from 1976 to 1984, transitioned into a milder pattern over subsequent years. The winters of 1984-1985 and 1985-1986 weren’t exactly balmy; but they weren’t severe, either. Throughout my last two years of high school, classes were rarely canceled due to weather. This was fine with me, because I generally enjoyed high school more than grade school.

And during my college years, spanning the winters of 1986 to 1987 through 1990 to 1991, the winters in Cincinnati were notably mild. I did not go away for college; I lived with my parents and commuted to two local schools. I did not miss a single class due to bad winter weather throughout my entire college career.

That mild cycle continued through the early 1990s, only to go the other way again in the middle of the decade. The winter of 1995 to 1996 was an especially bad one for the entire Midwest, resulting in a rare shutdown of the University of Cincinnati in January of ’96. By this time, I was a working adult in my mid-twenties.

The winter of 1995 to 1996 drew comparisons in the media to the blizzard winters of the mid-1970s. I remember scoffing when I heard this. Having been a kid during those fabled winters of the 1970s, I never took the comparison seriously.

But then, everything seems to happen on a larger scale when you’re a kid…even the weather.