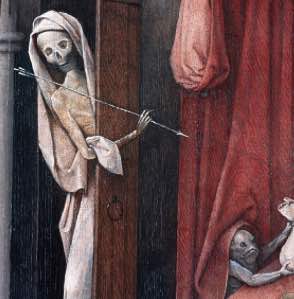 This is a question I received the other day on Twitter.  It isn’t a frivolous question, I suppose. About a third of my titles are classified as horror, after all.

Perhaps I should begin by clarifying what kind of horror I don’t write.

I don’t do excessive gore/violence.

I have never been interested in horror fiction that fetishizes violence and cruelty for the mere sake of wallowing in such things. (If that’s your goal, then why not just watch one of those ISIS beheading videos?)

This means that graphic depictions of torture (for example) don’t appear in my books. Cannibalism is pretty much out, too. (Gross.)

I’m old enough to remember the capture of Jeffrey Dahmer in 1991. Suffice it to say that I am not interested in exploring the most extreme possibilities of human depravity in fiction. Again, what’s the point?

Are you into “splatterpunk”? You probably won’t like my books. Do us both a favor, and read something else.

You’ve certainly seen horror movies that involve the following scenario (or something like it): A group of obnoxious, unlikable people enter a house, and they’re killed off one by one.

But the thing is…you don’t care! The protagonists were all awful people, anyway. (Maybe you were even rooting for the monster.)

I don’t do comedy-horror.

Do you like the Zombieland movies? My horror fiction probably isn’t for you.

I love comedy films—Airplane, Blazing Saddles, etc. Cheers from the 1980s can still make me laugh.

But horror is serious business. There can be moments of levity amid the darkness. There are many of these in some of Stephen King’s novels. (Cujo and The Stand stand out in this regard.) But when the monsters come out, it’s all business. Monsters are serious.

So what kind of horror do I write, then?

My influences are Stephen King, Peter Straub, and the campfire ghost stories of my youth.

I have always been fascinated by urban legends. I am endlessly interested in the dark house at the end of the lane, the one that all the kids say is haunted.

A good horror story should involve characters that you care about. If you don’t care about the characters, then you won’t care if the monster gets them.

A good horror story should involve redemption. The evil is defeated in the end. Or some crucial lesson is learned. Or the human condition is in some way illuminated.

Redemption is a key element of most of the horror stories that we love best. The salvation of Mina Harker at the end of Dracula. The closing scene of The Stand, in which Frannie Goldsmith and Stu Redman wonder aloud if people ever really learn from their mistakes. The last scene in The Dead Zone, in which the shade of Johnny Smith assures Sarah that nothing is ever really lost, nothing that can’t be found.

Note that redemption doesn’t necessarily mean a happy ending. But there has to have been a point to it all.

I like ghosts, monsters, things that go bump in the dark. My sainted grandmother was a direct descendant of immigrants from County Cork, Ireland. And every Irishman (even a diluted, generations-removed Irishman like me) loves a good ghost tale.

Let me give you some examples. Here are a few of my horror novels, to date:

A college filmmaker takes a walk down a notoriously haunted road, in order earn a $2,000 fee for documenting the phenomena he sees.

On Halloween night, 1980, three adolescent friends go out for “one last Halloween”. But they have been cursed by an entity known as “the ghost boy”. As a result, their familiar neighborhood is transformed into a supernatural landscape filled with vampires, wayward spirits, and trees with minds of their own.

View 12 Hours of Halloween on Amazon.

In the summer of 1976, an Ohio teenager named Steve Wagner discovers that the Headless Horseman has returned to terrorize twentieth-century America. The Horseman has brought other ghosts back with him, including the once beautiful (but now hideous) Marie Trumbull, an executed Loyalist.

I have others; but these are the three you might check out first. They are usually enrolled in Kindle Unlimited, which means you can read them for free if you subscribe to that service.