Like a lot of readers in recent days, I’ve been seized by a sudden (and arguably masochistic) urge to reread The Stand. This is Stephen King’s 1978 post-apocalyptic novel of a “super-flu” called Captain Trips. In the novel, at least, the super-flu wipes out civilization and leaves few survivors.

So I went ahead and ordered it from Amazon the other day.

The premise of The Stand is obviously topical now. But this is also a book populated with some of Stephen King’s most memorable characters: Stu Redman, Franni Goldsmith, Mother Abigail, etc. It is a long book, but it is not a slow book. 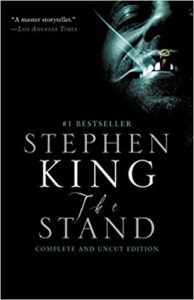 The Stand is the most common favorite of longtime Stephen King readers, a fact which has caused the author a certain amount of chagrin over the years. In at least one interview, King wondered aloud why so many readers give their highest rating to a book that he wrote while still in his early 30s. But that’s the way it goes with art sometimes.

I read this book for the first time in 1984. I was in high school then, and those were simpler times. That isn’t just my nostalgic side speaking. Heck, last year was simpler times.

Like a lot of you, I’ve been feeling a little bit like a character in The Stand of late, and I want this movie to end, already. The good news is that coronavirus is not nearly as deadly as Captain Trips, nor should a cure or a vaccine indefinitely elude researchers.

But yes, these are unsettling days, and we all need the catharsis of a good story—even one we’ve read before, a long time ago.

View The Stand by Stephen King on Amazon.