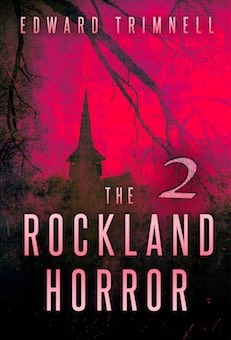 Sometime later this week or early next week, The Rockland Horror 2 will hit the virtual bookshelves on Amazon.

The Rockland Horror series is for fans of:

This story will pick up where The Rockland Horror left off. In the summer of 1882, the town of Rockland, Indiana is reeling from the wave of murders and kidnappings that occurred in recent months.

One man, George Marston, has been tried, convicted, and executed for these crimes.

The people of Rockland believe that the terror is over.

Since marrying the reclusive railroad tycoon Theodore Briggs, Ellen (nee Sanders) Briggs has found herself living in a state of captivity and abject terror. She is trapped in a big mansion filled with evil spirits, the roaming undead, and her cruel, mercurial necromancer of a husband.

Louisa Goodwin was given psychic powers of insight following her near-death experience. Louisa is struggling to recover from the personal tragedies she suffered during the preceding spring: the deaths of her parents and younger brother.

Louisa’s visions tell her that the situation in Rockland, Indiana is about to get much, much worse.

I’ll be posting links for The Rockland Horror 2 here on the blog as soon as the book is available. If you haven’t read The Rockland Horror (published in February 2021) get it here, or via the link above. As these books are both parts of a series, you should really read them in order.