I can recall the first time that I was actually scared by something that I read.

It was the summer of 1977. Somehow a book of short horror stories had come into my possession: Stories of Ghosts, Witches, and Demons. This slender 80-page volume, edited by Freya Littledale, was published by Scholastic in 1971. 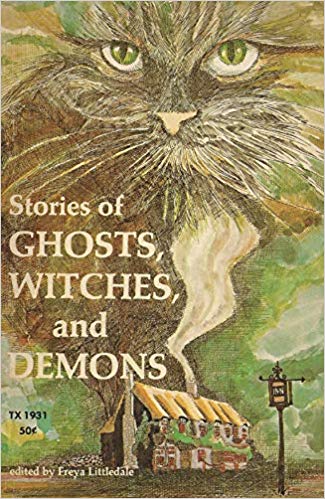 Although I read the book cover-to-cover, I have forgotten all of the stories—except one: an especially creepy tale called, “The Demon of Detroit”.

This is the story of a married couple, Mr. and Mrs. Adams, who move into a house in the Motor City. They soon discover that they aren’t alone. Something horrible inhabits their back bedroom.

After a series of disturbing events, the couple decides to move out of the house. The last lines of the story are particularly haunting: They indicate that the Adamses “admit defeat”. Whatever lurks in the back bedroom will now have the rest of the home to itself, too.

The full text of the story (along with a clip of the artwork appearing in the original Scholastic publication) is available online. I do recognize the artwork. I can’t say for certain if the transcription of the 1971 text is one hundred percent faithful. (I was nine years old in 1977, after all.)

“The Demon of Detroit” seems to be based on an urban legend from the 1960s, which has enjoyed a modest contemporary revival. Urban legends, I’ve found, often make good source material for horror films and short stories, because urban legends are instantly relatable and easy to grasp. They aren’t overly complex. That’s important in horror film and fiction.

“The Demon of Detroit” also demonstrates the effectiveness of the short form in horror. This short story is perhaps a thousand words long. Obviously, they won’t all be that short. But as a rule of thumb with horror: the longer the story, the harder it is to maintain the suspension of disbelief. (Notice that Poe, Lovecraft, and even Stephen King are at their best when writing in the short form.)

“The Demon of Detroit” is a story that begins with a subtle atmosphere of darkness, and builds, over about a thousand words, to something truly malevolent.

“The Demon of Detroit” scared the bejesus out of me in 1977. I reread it today (the online version). It still brings a chill to my spine, forty-three years later.