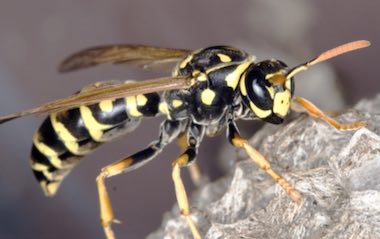 After an early May that veered between March-like cold and constant rain, summer has come roaring into Southern Ohio. Afternoon temperatures in the Cincinnati area will flirt with the low 90s this weekend. (That’s 90 degrees Fahrenheit, for you readers in Canada and the UK.) No rain on the horizon for at least three or four days.

People in my neck of the woods are currently getting worked up about cicadas. Cicadas don’t bother me. Bring ‘em on! as they say. I survived the great cicada outbreak of ’87. I’ll make it through this one, too.

There is only one insect—only one creature, in fact— that I despise with implacable, murderous intent: the wasp. I have always hated them, and my market share of wasp spray is likely a line item on the balance sheets at both Raid and Spectracide.

There is an old German proverb, “God made the bee, but the Devil made the wasp.” It’s absolutely true. Wasps are pure evil. And they know when you’re about to come after them. I have the stings to prove it.

There is a group of wasps building a nest under the eaves on one side of my house. Armed with a good supply of chemical warfare agents, I intend to send as many of them as possible straight to Hell before the weekend is over.

I usually pimp my short horror story, The Wasp, in late May or early June. It’s like an annual rite of summer for me. But you can read it for free here on the site.

I hope you enjoy your Saturday, wherever you are. As for me, I’ll be cutting grass, trimming trees, oh…and killing wasps.