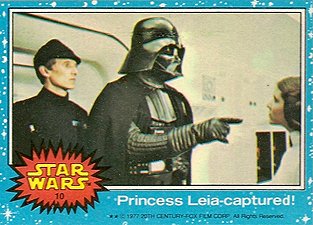 I was a member of the original Star Wars generation. I remember sitting in the cinema with my dad, in the summer of 1977, watching that opening text crawl:

I was instantly hooked. There was something special about being a kid in 1977, when Star Wars was brand new, and there was one movie, instead of a gazillion of them.

I also became one of the millions of child consumers who fueled the Star Wars licensing boom.

Collecting action figures would be an extremely nerdy activity for me today (pathetic, actually—I’m in my fifties); but at age nine I was just fine with that. I had many of the Star Wars action figures.

But I especially liked the Star Wars trading cards.

I had always felt left out of the baseball card trading craze of the 1970s. (I never minded spectator sports, but to this day I’m not crazy about them.)

But Star Wars cards, yes, I loved those.

Each card featured an iconic scene from the movie. Also, each pack of Star Wars cards contained a sticker (very useful for adorning my looseleaf binder in the fourth grade).

Oh, and a stick of gum—just like the baseball cards.

I doubt that kids bother with any sort of trading cards anymore. It’s all about i-this and i-that nowadays.

But forty-odd years ago, if you were a kid who was crazy about Star Wars, it was a lot of fun to collect those cards.