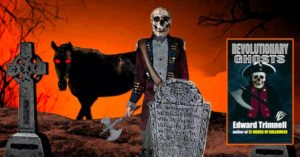 I was tying my tie in Dr. Beckman’s exam room when I felt the chill. I was alone in the tiny, antiseptic space. The doctor had stepped out to allow me to get dressed.

I took a deep breath. The cool air had a vaguely chemical odor.

There was nothing in here to be afraid of. From where I stood, leaning against the exam table, I could see a sink and counter—spotless and sterile—lined with bottles of hydrogen peroxide and rubbing alcohol. Formica and metal surfaces, gleaming in the bright glare of the overhead florescent light panels.

The tiled floor gleamed, too. Beneath the sink, there was a little rolling stool. (There is one of those in every exam room on the planet, it seems.)

I took a deep breath, and continued tying my double Windsor knot.

There is nothing in here to be afraid of.

Then I saw the closet door, in the corner of the room behind the exam table.

The door was slightly ajar—just a crack.

Had it been closed ten minutes ago, when Dr. Beckman was in here, prodding me with his stethoscope, tongue depressor, and ear speculum?

I wasn’t sure. But after recent events—and after long-ago events—I don’t like doors that are slightly ajar, doors that partially reveal dark spaces.

I could feel my skin breaking out in gooseflesh beneath the starched fabric of my white Oxford dress shirt.

The room is chilly by design, I told myself. Someone—I forget who—once told me that temperatures in medical facilities are kept deliberately low, so as to stymie the growth of molds and bacteria.

But what else was growing in here? What was hiding in that closet, that I couldn’t see?

I felt foolish for having such thoughts, for even raising such questions. I am not a child. I am a fifty-nine-year-old man, a father and grandfather. I’m a divisional manager at Covington Foods, a large consumer goods company based in Cincinnati, Ohio.

I have investments. Stocks and mutual funds. All the requisite forms of insurance, for a man my age.

No one who knows me would say that I am easily spooked, whimsical, or given to flights of fancy. My wife, in fact, calls me “Steady Steve”.

And Steady Steve I am, most of the time.

But this past week, I have not been myself.

Fully dressed now, I was trying to decide what to do about that closet door. I was weighing two options.

On one hand, I could walk across the room and push the door shut. That would be the simplest option.

On the other hand, I could pull the door open. Then I would know for sure that there was nothing lurking in that space.

I was still considering these options when I heard a door click open behind me. Not the closet door, but the door of the exam room.

Dr. Beckman was back.

Dr. Beckman is a stoop-shouldered man with a sallow complexion. He is still in his thirties, but his light brown hair is fast receding. He wears thick glasses.

Dr. Beckman has been my family physician for about three years now. My wife, Peggy, and I started seeing him after dear old Dr. Alfieri finally retired at the age of seventy-two.

I greeted Dr. Beckman. I noticed that he was carrying a clipboard.

I was in his office today for the second half of a two-part exam. The first half had been carried out last week.

This was a routine physical, but nevertheless done at the behest of my employer. Covington Foods requires all of its managers to receive a stem-to-stern physical exam every two years.

“We can go over the results of your exam,” Dr. Beckman said, “if you’re ready. Per the usual procedure, my office will send a copy of the results to the Covington Foods human resources department. We’ll also mail a copy to the home address that we have on file for you.”

Dr. Beckman consulted his clipboard. “The results of the blood work that you had done last week are quite satisfactory. Liver and kidney function look good.

“Same for lipids. We’ll have to watch your LDL cholesterol, moving forward. But that’s the same for practically everyone. You performed well on your stress test. Not bad at all, for a man your age.”

“That’s okay, Doc. I’m fifty-nine years old this year. We need not pretend that I’m a spring chicken. But it’s good to hear that I shouldn’t die in the foreseeable future, just the same.”

My last sentence, those words about death, seemed to hang in the air. Was I really certain that I wouldn’t die in the foreseeable future? And it wasn’t my LDL cholesterol that I was worried about.

I knew, from the events of forty years ago, that there were far worse ways to die.

“Of course not,” Dr. Beckman said, with a tight little smile. “I anticipate you’ll be coming in for many more biennial exams yet.”

The doctor paused, not saying anything for a moment. During my more than thirty years at Covington Foods, I have had literally thousands of encounters with bosses, colleagues, and subordinates. I can always tell when someone has something to say, but doesn’t quite know how to broach the topic.

The doctor seemed relieved. “Yes, well, I suppose there is something. I couldn’t help noticing that you’ve displayed signs of acute anxiety this week. I didn’t notice that last week, when you came in for the blood work and the stress test.”

‘Anxiety’, Dr. Beckman called it. That was putting the matter lightly. My problems had begun on Tuesday of last week, the day after my visit to Dr. Beckman’s office, for the first part of my full-body exam.

But there was no way I could discuss the past week and a half with Dr. Beckman.

“I don’t think so,” I said, playing dumb. “A little stress at the office maybe. Nothing more.”

I could tell that Dr. Beckman didn’t believe me. You don’t get through medical school without being perceptive.

But in another second my facade would crumble, anyway.

That was when I heard the hoofbeats, thundering down the hallway. I could picture a dark black horse. The animal would be partially rotted from the centuries it had spent in the grave, its muscles and bones exposed here and there. The eyes of the horse would be dead and glassy.

The rider of the horse would be wearing an eighteenth-century military frock coat, also rotted and in tatters, heavy trousers and boots.

The rider would be wearing no hat. Because the rider had no head.

The rider would be wielding a large battlefield sword.

The rider and horse would burst through the door of the exam room. First the Horseman would behead Dr. Beckman. (Dr. Beckman would barely have time to see the blow coming; and he certainly wouldn’t have time to save himself.)

Dr. Beckman’s head would topple from his body and roll to the floor. Then his body would drop, so much dead weight, his neck spurting blood.

And then the Horseman would take my head, too.

I had evaded him for more than forty years. But I would evade him no longer.

A few more seconds passed, and I realized the nature of my delusion. The hoofbeats in the hallway moved past the closed door of the exam room. Then I realized that they were not hoofbeats at all.

What I had heard was the ruckus of a nurse or orderly pushing a caster-wheeled cart atop the tiled floor of the hallway outside the exam room. A perfectly normal sound in any medical building.

I recovered myself. Dr. Beckman was staring at me with narrowed eyes.

Dr. Beckman made not even the slightest pretense of accepting my excuse.

Dr. Beckman did not convince me quite that easily. As I’ve said, I’m a divisional manager at Covington Foods. I don’t easily budge when I am not of a mind to do so.

“Have you ever heard of cortisol, Steve?” Dr. Beckman asked me.

I was somewhat puzzled by this seemingly off-the-wall question.

“Very good,” Dr. Beckman said, nodding. “Exactly. Cortisol is your body’s main stress hormone. As you might be able to guess, your body secretes cortisol when you are under stress. Part of the body’s fight or flight mechanism. A small amount of cortisol is relatively harmless.”

“I have a feeling, Dr. Beckman, that you’re going to tell me that larger quantities of cortisol are not so harmless.”

“Right again, Steve. Over time, large quantities of cortisol can have a myriad of negative effects on your health. And I’m not merely talking about things like a touchy stomach or sleeplessness, though symptoms begin that way. Over time, large amounts of cortisol can lead to autoimmune diseases, heart disease, and even cancer. That’s what chronic stress does to your body.”

I took a moment to take in what Dr. Beckman had just said. It was a sad irony to think that even if the Horseman hadn’t beheaded me forty years ago, the memory of him—these flashbacks—might bring about my death by a thousand proverbial cuts.

In more than forty years, I had told no one about the events that transpired in the summer of 1976. I was the only one left alive who fully remembered them.

Perhaps I had kept my secrets too long. Perhaps I could benefit by opening up, just a little.

Could I tell Dr. Beckman about that horrible summer? No, I didn’t think I could. But perhaps I could tell him about the problems that I had been having more recently.

“Okay, doctor. I suppose I get your point. I have been under a more than usual amount of stress lately. Some very unusual things have been occurring.”

Dr. Beckman leaned back against the spotless counter where the sink was. He set his clipboard on the counter, near the bottles of rubbing alcohol and hydrogen peroxide.

“By all means, Steve. Do go on. We have some time left in your appointment hour.”

I took a deep breath before beginning. “Okay, Doc. It all began with a quarter.”