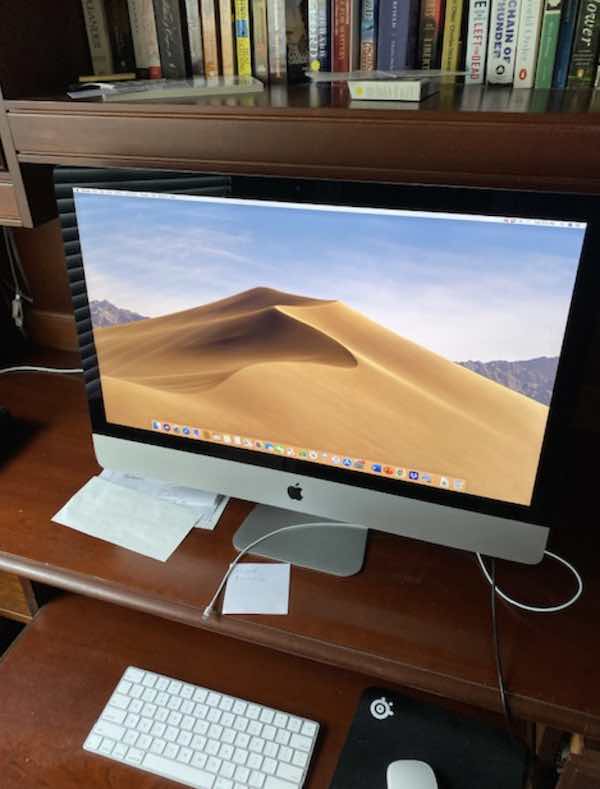 I last upgraded my Macs (I use an iMac and a MacBook Air) in June 2016. Which means that I was more than due for an upgrade, by any reasonable standard.

a) Is the existing equipment starting to malfunction?

b.) Could the new equipment provide substantial benefits (as opposed to simply being “the latest thing”?)

My 2016 iMac, which actually rolled off the Apple assembly lines in 2015, was starting to have problems. The webcam had not worked for quite some time. This was preventing me from restarting my YouTube channel—something that has been on my to-do list for a while.

More recently, the mouse had gotten buggy. Last week, the mouse stopped moving laterally (in either the right or the left direction) at all.

Okay, it was time for an upgrade. So I took the plunge. And hey, Apple needs some more of my money, right?

I’m quite happy with the new iMac, which is shown in the photo at the top of this post. I won’t turn this into a sales pitch or a tech review, but I will elaborate on one feature that is near and dear to my heart: native dictation capabilities.

The Siri dictation functions on the Mac have improved greatly. Dictation is something that interests many writers concerned about repetitive stress injuries.

But dictation has been problematic for Mac users.

Apple needed to make progress on its native dictation functionality. That seems to have happened.

I’ve been using the dictate function for composing several rough drafts. The Siri dictation is still not quite as accurate as Dragon Dictate is at its best. But Siri dictation is worlds better than it used to be.

Like I said, I’m conservative when it comes to upgrades. Not only is there the cost of the new equipment to consider, but also the hassles involved in moving everything over to the new machine(s). My 2015 MacBook Air, purchased in 2016, continues to function with relatively few problems. I’ll probably replace it by the end of the year, but I’m in no hurry just yet.