Through Sunday the ebook version of Luk Thep: a horror novella will be reduced to $0.99.

I wrote this one I after I read this article in The Economist. 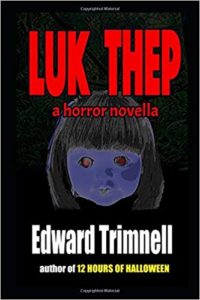 The ‘luk thep’ are the ‘angel dolls’ or ‘spirit dolls’ of Thailand. Ultra-realistic in appearance, some Thais believe that each doll is infused with the spirit of a prematurely departed child. But are all child spirits benevolent?

Jane Hughes is an American executive who is visiting Thailand for a routine business trip. When she sees her Thai colleague’s ‘luk thep’ doll, she has dark premonitions about what is actually inside it. When Jane later receives the same doll as a gift, she begins a ghostly nightmare that will lead to terrifying supernatural encounters on two continents. 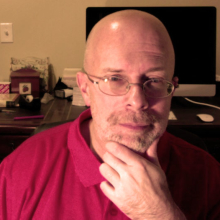 Early in 2016 I read an article in The Economist about a new craze in Thailand among affluent, single, childless women: the luk thep, otherwise known as ‘angel dolls’, or ‘spirit dolls’. According to the article, many luk thep owners believe that each ultra-realistic-looking luk thep doll contains the spirit of a child who died prematurely.

I knew there had to be a story in there somewhere.

My first thought was, “What if the spirit that inhabited a particular luk thep wasn’t especially nice?”

The result of that line of thought is, Luk Thep: a horror novella.

This is a tale of what happens when a 34-year-old American executive, a woman named Jane Hughes, travels to Thailand and encounters a nasty luk thep named Lawan.

This is more than just another “haunted object” story: In addition to harrowing supernatural events on two continents, herein you’ll find corporate politics, the travails of thirty-something dating, and much more. This is also, at its heart, a story about culture shock, which I well recall from my own days in the global automotive industry.

Jane looked closer, and now she saw that the small figure seated in the chair was only a doll, albeit a very realistic-looking one.

“She gave you quite a scare,” Khajee said with good humor. Jane noted Khajee’s use of the personal pronoun. Jane also noted that yes, indeed, the doll had given her quite a scare.

The corporate realm was not a world without fear. The cutthroat competitiveness of the global economy produced a macro-level fear of being downsized, “right-sized” out, or otherwise falling into obsolescence. Jane had not a protectionist bone in her body, but she couldn’t help feeling the occasional twinge of admiration-mixed-with-resentment toward her Asian colleagues: They worked so tirelessly, so efficiently. All of the jobs at TRX Automotive Thailand represented jobs that no longer existed in the United States. How long before her job, too, was outsourced to a more efficient Asian or Latin American rival?

Beneath the macro-level fears was the constant uneasiness about where you stood within the company hierarchy–not just the formal organization chart, but within the ever-shifting hierarchy of senior management favor. This was not simply a matter of doing your job well, but of maintaining the outward perception that you were doing your job well.

Although Jane was single and had no dependents, she had much invested in her career. She knew that despite her undeniable hard work, she was fortunate to be where she was at her age. Jane did not want to lose what she had gained. She wanted to continue moving forward.

Anxiety about such matters occasionally kept Jane up at night. But the fear of the genuinely unknown was mostly alien to her existence. No one ever discussed haunted houses or vampires at a corporate meeting, even during the informal pre-meeting banter. To express an interest in the macabre would be (yet another) way to sideline your career prospects. People would think you were unhinged.

Perhaps that was why Jane was momentarily uncomfortable over her reaction to the doll. She now knew, rationally, that the doll was just a doll. But it made her uneasy, nonetheless.

Khajee nodded. “Each one of them is unique. They aren’t cheap.”

Khajee then mentioned the price she had paid in baht, the Thai currency. It was an amount that corresponded to about $800 American dollars.

“A lot to pay for a doll,” Jane blurted out. Then she realized the potential rudeness of her observation. “I–I’m sorry. I didn’t mean anything by that remark.”

But it was a lot to pay for a doll, realistic-looking or not.

“That’s okay,” Khajee said. “But this is a special kind of doll, you see. And I’m not only talking about the way it looks. The doll is called a luk thep. That means ‘angel doll’ or ‘spirit doll’. They perform a ceremony for each doll at the plant where the dolls are made. And then each doll is supposed to be inhabited by the spirit of a deceased child.”

“Well, yes,” Khajee replied, after giving the matter some thought. “I suppose that’s one way to look at it, though a Buddhist would see the matter differently than someone from the West, you understand.”

Jane nodded noncommittally. A lapsed Roman Catholic, there were many holes in her knowledge of her own spiritual and religious traditions. She had only the vaguest grasp of Buddhist beliefs.

Didn’t the Buddhists believe in reincarnation? Jane was almost certain that the Buddhists did. Perhaps that would make them more comfortable with the notion of a ‘haunted doll.’

But still, even a Buddhist would have to ask certain inevitable questions. For starters: What kind of a spirit would want to inhabit a doll, and to what purpose?

“It certainly looks realistic,” Jane said, repeating her prior observation, not knowing what else to say.

“Her name is Lawan,” Khajee said, as if correcting Jane. Khajee smiled self-consciously. “Yes. I named her. Most luk thep mothers do. I suppose you’re wondering why an adult woman would want to buy a doll and name it.”

Jane couldn’t avoid an involuntary flinch at Khajee’s description of herself as the doll’s ‘mother’.

“I suppose I would wonder,” Jane admitted.

If you think you might like to read Luk Thep, now is a good time to get it. Next week, the price will go back to $3.99. (Still cheap, but not dirt cheap.)