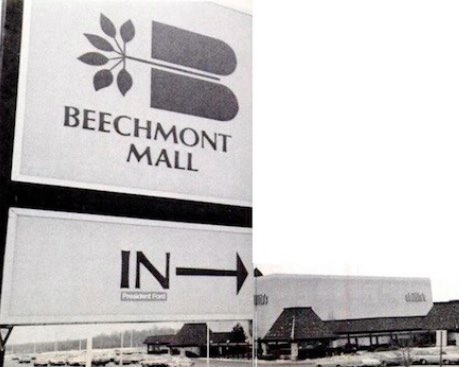 The other day, quite on a whim, I shared the above photo for my personal Facebook tribe, which consists disproportionately of former high school and grade school classmates. (I am 52 years old, and I was recently reunited on Facebook with a fellow who sat behind me in our third grade classroom. But that’s another story for another time.)

Beginning around 2000, Beechmont Mall was gradually dismantled, and replaced with an outdoor monstrosity now known as Anderson Towne Center. Twenty years later, what is left of Beechmont Mall would be virtually unrecognizable to a time traveler from 1970, 1980, or 1990.

Beechmont Mall was a place of wonders. There were bookstores, a record shop, and several well-stocked department stores. During the holiday season, there were elaborate Christmas displays.

I posted the above photo in my personal Facebook feed without expecting too much reaction. To be honest, I’d realized that with last month’s election and all, I’d been posting too much partisan political content there. I wanted to lighten the tone a bit.

I didn’t expect many reactions…maybe a like or two. But the photo got lots of likes. Almost immediately, my old friends and classmates began typing comments, detailing their fond memories of Beechmont Mall.

I wasn’t the only person who missed Beechmont Mall. Not by a long shot, as it turned out.

If you didn’t grow up on the east side of Cincinnati between 1970 and 2000, Beechmont Mall and the above photo mean nothing to you. I get that. This is my nostalgia, not necessarily yours.

But beyond the little corner of America where I grew up, there was a Golden Age of the American mall, between roughly 1970 and 1999. This is evidenced in the films of the late 20th century. Consider the centrality of the mall used in Fast Times at Ridgemont High (1982), and other Reagan-era teen movies.

The local mall was a place to people-watch and to be seen. It was a place to go to dinner with your parents. (But you didn’t want to be seen by any of your classmates on those outings, because going to dinner with one’s parents was just so uncool, no matter how much you loved them.) The mall was  a place to spend your grass-cutting or babysitting money on the latest album from Def Leppard or AC/DC. I bought many Stephen King novels at Beechmont Mall’s two bookstores, B. Dalton and Waldenbooks.

Many of us had our first jobs at the local mall, too. I worked for a time at the Woolworth at Beechmont Mall. This was a Woolworth store built on the original model, complete with a little diner inside the store. The Woolworth had a unique, mid-2oth century environment. It was a time capsule of sorts even in 1985.  I enjoyed working there.

By the time we entered our early twenties and college/working life, the magic of the local mall had faded for most of us. But the mall was a good place to be a kid or a teenager in the 1970s, 1980s, or 1990s.