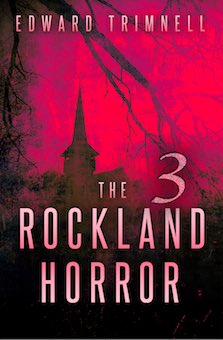 Here’s the first chapter of The Rockland Horror 3

It was a chilly, wet day in March 1917, and thirty-year-old Joe Cullen was overdue for a smoke break.

Joe shot a quick glance over his shoulder. He wanted to make sure that his foreman was nowhere in sight.

Joe was relieved to find himself completely alone on the tree-lined road. All around him, there was nothing but the silent woods. And the light, cold moisture falling from the leaden sky.

Well, almost nothing. There was the Briggs House, too.

This thought made him smile self-consciously. Country people and their superstitions. Never mind that Joe was as country as they came. He also read books, dagnabbit. He had knowledge of the broader world.

He bent and laid his shovel down in the long, sallow, late-winter grass at the edge of the road. The road itself was muddy, owing to the wet weather. He did not want the handle of his shovel to get muddy, too. He still had a lot of work to do with that shovel before quitting time.

That done, he stood, removed his gloves, and slipped them into the lower left side pocket of his coat. From the lower right side pocket he removed a box of Lucky Strikes and a box of wooden matches.

Joe was wearing a broad-rimmed hat, a treated canvas raincoat, and heavy boots. The overhanging tree branches—though still bare of leaves—also caught some of the light rainfall. But when you were working outside in weather like this for an entire day, it was impossible to avoid either the dampness or the chill.

Today’s precipitation was not a hard, driving rain; but it was a steady, unrelenting spittle that varied between mist and drizzle. Fireplace weather, Joe’s mother would have said.

But there would be no fireplace for Joe today—not until quitting time, at least; and that was still several hours away.

Joe was currently employed by the Indiana Department of Transportation, a brand-new state agency created by the Indiana Highway Act of two years prior. Joe was part of a crew that had been charged with preparing Washington Hill Road for paving.

At present, the road was all packed earth and gravel. It was literally the same road that had been used in the pioneer days. Washington Hill Road turned to mud every springtime, or even during a midsummer thunderstorm. That might have been suitable for the age of the horse. It would not do for the age of the automobile.

As he paused to light his cigarette—cupping both the cigarette and the match in his hands to shield them against the moisture in the air—Joe allowed himself a look at the Victorian mansion that was impossible to miss at this point on Washington Hill Road.

The Briggs House rose above him in the distance. The decrepit monolith appeared old-fashioned and dark, even when silhouetted against today’s cloudy gray sky.

The Briggs House was on the left side of the road. It stood at the top end of a long, winding, overgrown private lane that rose to a promontory. When the trees were bare, the roofline of the mansion could be partially glimpsed far below Washington Hill, Joe knew. He was a lifelong resident of Rockland, Indiana.

He smiled to himself, and took a drag on his cigarette. Joe Cullen knew all about the Briggs House—the murders, the whispered stories of witchcraft and necromancy. Much of that was pure fabrication, and at least half of it was pure nonsense.

Joe Cullen had no way of knowing that within a matter of minutes, he would hold an entirely changed attitude about the Briggs House.

About The Rockland Horror saga:

Read it in Kindle Unlimited!

The Rockland Horror saga is FREE to read in Amazon Kindle Unlimited!