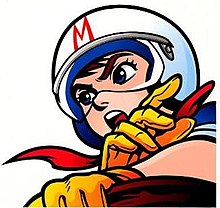 I can tell you what I was doing, most afternoons at 3 pm in 1972. (I was four that year.) I was sprawled out in front of my parents’ boxy Zenith television set, tuned in to Cincinnati’s Channel 19, WXIX.

That was the time and place in which Speed Racer aired.

The Speed Racer franchise began in Japan in the 1960s as a manga comic series. In 1967, a Speed Racer animated cartoon was developed; and this is what found its way to the US market (dubbed into English, of course).

The best way to describe Speed Racer is as follows: The series concerns the adventures of “Speed”, the driver of the technologically advanced Mach 5 racer.

Like many Japanese manga, Speed Racer takes place in a setting that is the real world, but not quite the real world. There are unrealistic technological menaces (like the “Mammoth Car”); and the series may have had a monster or two.

I didn’t know back then that Speed Racer was a Japanese import. (I also didn’t know that many years hence, I would learn the Japanese language; but that’s another story.) At the age of four, I may not have even been aware of Japan.

I just remember being thrilled by the adventures of Speed and the Mach 5. These were fun cartoons, filled with action, and instantly accessible. Speed Racer is the first television series that I ever became a fanatic of; and in 1972, I was a Speed Racer fanatic.

I recently watched a few episodes of Speed Racer on YouTube, for nostalgia’s sake. These cartoons fascinated me at the age of four. And even at the age of 51, they retain for me a certain charm.