Which is another way of saying he was fired, probably with some kind of a severance package.

As you may recall, Thom Brennaman was suspended last month after he was recorded—in a classic “hot mic” situation—while making a joking speculation about the gay population of an unspecified city.

My take on this? Well, it’s mixed.

On one hand, I’m not going to virtue-signal and feign outrage that I simply do not feel.

I’m from the 1980s, after all. I grew up with humor like this: Eddie Murphy—a popular black comedian and actor—making a blatant gay joke in Beverly Hills Cop. END_OF_DOCUMENT_TOKEN_TO_BE_REPLACED

Today Franklin Graham is leading a prayer march in Washington, D.C.. I’m glad to see that most everyone seems to be wearing a mask, even though it’s an outdoor event.

FWIW, I have my doubts about any mass in-person gathering during the pandemic. But the folks in the media who decry every public religious event as a threat to public health suddenly forget the words “COVID” and “coronavirus” when the gathering involves BLM/Antifa rioters, er, “peaceful protestors”. (Never mind that the “peaceful protestors” happen to be smashing windows, attacking passersby, and throwing molotov cocktails.)  END_OF_DOCUMENT_TOKEN_TO_BE_REPLACED

Amid all of the loss and chaos of 2020, there was one death I missed: that of radio host and author Barry Farber. Barry Farber died on May 6, 2020.

I became a fan of Barry Farber’s radio talk show during the 1990s. I was in my twenties then, and my life circumstances necessitated a lot of driving. I don’t mind music; but a little bit of music goes a long way during a two-hour drive. For a really long drive, talk radio is a much better alternative. (Yes, audiobooks and podcasts are even better alternatives. But audiobooks in the 1990s were expensive, and mostly distributed in packages consisting of multiple cassettes. Podcasts were still twenty years in the future.)

Farber was a political conservative. As those old enough to remember the 1990s will know, this was the age of the bombastic Rush Limbaugh, and the outspoken G. Gordon Liddy. Rush Limbaugh declared America during the Clinton era to be “America under siege”. G. Gordon Liddy once advised listeners to “go for a head shot” if their homes were invaded by federal law enforcement officers.

Barry Farber was different. He was a soft-spoken man who appealed to simple standards of common sense. He saw both sides of complicated issues. In the aftermath of the LAPD’s beating of African American suspect Rodney King in 1991, Farber condemned the LAPD’s excesses. But he also condemned the excesses of those who insist on running from and fighting the police. Extreme actions invite extreme overreactions, Farber pointed out. END_OF_DOCUMENT_TOKEN_TO_BE_REPLACED

Who woulda thunk it?

Richard Spencer, as most of you will know, is a white nationalist. He isn’t a conservative. Conservatives like myself claim no allegiance or affiliation with him.

The conservative view on race and identity politics is as follows: Address real and present racial injustices. Then stop talking about race as soon as possible. Every American should know the history of slavery and Jim Crow. Almost all Americans do know this history. But no one benefits by dragging events from fifty, one-hundred fifty, or four hundred years ago into every contemporary discussion.

(By the same token, every American should know about Pearl Harbor. But Pearl Harbor shouldn’t stop you from purchasing a Toyota. World War II ended 75 years ago.)

The point is: We are all Americans. We are all equal. We should all be judged as individuals. The only meaningful American colors are red, white, and blue; and those are  colors that we all share. END_OF_DOCUMENT_TOKEN_TO_BE_REPLACED

It has been noted—not inaccurately—that conservatives and Republicans are especially gratified by support from members of certain demographics, like African Americans and Millennial women.

Whether rightly or wrongly, these demographics are expected to lean Democratic and liberal by default. Nothing energizes a Republican crowd, therefore, like a conservative firebrand who isn’t white, male, or over forty. When debating online in venues like Twitter, there are plenty of conservatives who will share material from Mark Steyn or John Stossel. But they’ll likely look for something from Candace Owens or Tomi Lahren first.

This swings both ways, though. Liberal Democrats and leftwingers are always pleased to find a US military veteran who is willing to rally to their latest cause. This is because we generally expect present and former members of our military and police organizations to lean Republican. (And statistics show that most of them do lean Republican.)

One thing I’ve noticed on leftwing Twitter, in particular: If a person denouncing Donald Trump in a YouTube or TikTok video is a veteran (or convincingly claims to be a veteran), that video will automatically get thousands of shares.

Since the election of Donald Trump, #VeteransAgainstTrump has become a favorite leftwing Twitter hashtag. This mention of the parties’ prior military service isn’t accidental or coincidental. The idea here is that if someone served in the military and also opposes Trump, then their anti-Trump bias must carry particular moral weight.

Public school officials in Las Vegas are very interested in the racial and sexual preferences of their young charges:

“Parents at a Las Vegas high school were incensed by a survey that asked their kids how comfortable they are around White people and whether they would have a sexual relationship with a Black person, KTNV reports. West Technical and Career Academy, which began the semester last month fully remote, reportedly gave the teenagers the survey as part of an implicit bias lesson.”

For the record (because I know someone will ask): I’ve personally found many women of other races (including African American) attractive over the years. I’ll spare you the details beyond that, because I prefer to keep that sort of thing to myself.

Nor do I have any interest in telling other consenting adults whom they should or shouldn’t date, sleep with, or marry. Suffice it to say that I have bigger fish to fry, and that no one’s sex life interests me that much. END_OF_DOCUMENT_TOKEN_TO_BE_REPLACED

As we can see above, Portland’s “peaceful protestors” are now openly hurling firebombs at police, and anyone else who gets in their way.
It’s time to stop pretending that the riots are anything more than a magnet for sociopaths.
The police are doing what they can. But the Portland bomb-throwers represent an armed insurgency. An armed insurgency usually requires a military response.
Bring in the military. Give the law-abiding citizens their city back. Put a stop to this nonsense. Do it yesterday.

The white supremacist institution of policing that stole Breonna Taylor’s life from us must be abolished for the safety and well being of our people.

Let’s be clear here: Colin Kaepernick has a white birth mother, and he was raised by white folks in the suburbs. His ‘people’ are white suburbanites.

With Colin Kaepernick’s multimillion-dollar Nike endorsement deal, he doesn’t need the police. This is a guy who can easily afford private security.

Well, that’s what white liberals would like you to believe.

The reasons are simple. First of all, everyone wants a prosperous economy, and an American president who supports our country’s rational self-interest. When America wins, everybody wins. A rising tide really does lift all boats. END_OF_DOCUMENT_TOKEN_TO_BE_REPLACED

John Scalzi is a blogger and science fiction author who lives here in the Buckeye State. He is also West Coast liberal who was transplanted to Ohio several decades ago by (so far as one can tell) the circumstances of his marriage. He lives in Darke County, which is near Dayton, but very much out in the country.

Scalzi is a snide elitist who has spent much of the past four years declaring how backward, stupid, racist, and (fill in your favorite cliché) Trump voters are. Since Darke County voted overwhelmingly for Trump in 2016, this includes an occasional jab at his rural neighbors, who clearly fail to meet his expectations in many ways. At every opportunity, Scalzi will remind his readers that his neighbors are a.) white, and b.) overwhelmingly Republican.

(Yes, John Scalzi is also very white. But like many white leftwingers, he signals his virtue by using the word “white” as an epithet.) END_OF_DOCUMENT_TOKEN_TO_BE_REPLACED

Breaking ranks with Donald Trump and the Republican Party, the widow and second, younger wife of the late John McCain has publicly endorsed Joe Biden: “He [Biden] will be a commander in chief that the finest fighting force in the history of the world can depend on, because he knows what it is like to send a child off to fight,” McCain said.

I don’t find this a great surprise. There had long been bad blood between the late John McCain and Donald Trump. McCain made an unsuccessful bid for the White House in 2008, losing to Barack Obama. Throughout his 2008 campaign, McCain repeatedly pushed for a larger American military presence in the Muslim Middle East—something that Donald Trump rejected. McCain and Trump were different ideologically, even as their personalities clashed. END_OF_DOCUMENT_TOKEN_TO_BE_REPLACED

The political Left has a new bête noire tonight, and that individual’s surname doesn’t rhyme with dump, hump, or jump.

We don’t know for certain yet, but President Trump will likely nominate the 48-year-old jurist and law professor to the Supreme Court later this week.

Look at her résumé: Amy Coney Barrett is a superman, a superwoman, a superperson. Her academic and professional achievements are more than impressive.  A member of Generation X (my generation, by the way) Barrett was among the first cohort of young women to come of age in an era when a woman competing in a man’s world was well….no big deal. Barrett graduated from high school in 1990. I graduated from high school four years prior to that, in 1986. I can tell you with the certainty of one who was there: women had all the educational options of men by that time. And Amy Coney Barrett made the most of them. END_OF_DOCUMENT_TOKEN_TO_BE_REPLACED

and the costs of harboring radicals…

Today at a campaign stop in Wisconsin, a reporter questioned Joe Biden about the “s” word. This was a classic foot-in-mouth Biden performance:

Fox 11’s Kia Murray asked Biden: “If you could address our camera directly, talk to the voters that are worried about socialism and you raising taxes.”

“First of all, I promise,” Biden said. “I’ve never broken my word. Anyone making less than $400,000 will not see one single penny in their tax raised.

END_OF_DOCUMENT_TOKEN_TO_BE_REPLACED 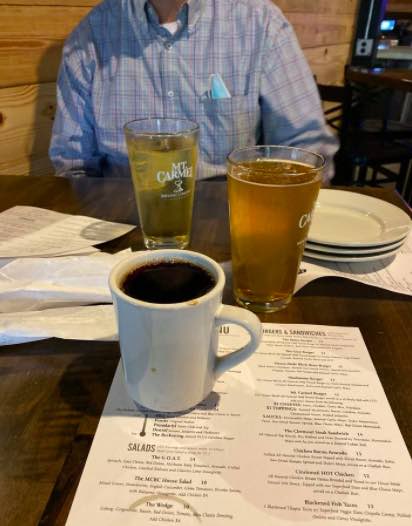 I have many things to be thankful for. Among these is the longevity of certain friendships. I am 52 years old, and I still have friends from literally the first grade. These are people whom I met for the first time in the now antediluvian year of 1974.

This past Thursday night, one of those old friends planned a get-together at a little restaurant/bar here in Clermont County, Ohio. We had a good time catching up.

As the photo implies, I had coffee rather than an alcoholic beverage. I’m a teetotaler, more or less; but that’s another story for another time.

I regularly listen to a handful of podcasts for indie authors. These shows  rely heavily on guest appearances. Usually the guests are indie authors who have found success, and are willing to share their secrets.

About three years ago, T.S. Paul started appearing on these shows. I knew immediately that he and I were two different kinds of people, and different kinds of authors. I could also tell that he was a bright guy, and worth watching. I figured that I could learn from him.