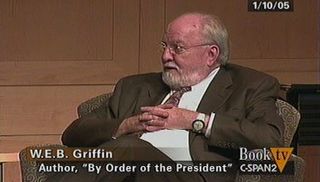 I’m presently reading The New Breed, the 7th book in W.E.B. Griffin’s Brotherhood of War series. This novel follows the lives and adventures of several U.S. Army personnel involved in covert operations warfare during the 1960s, particularly in Vietnam and the Congo.

Like most W.E.B. Griffin novels, The New Breed is not simply a series of combat scenes strung together. Nor is this a novel in which the Fate of the World rests on one man’s shoulders.

The New Breed is more a slice-of-life look at fighting men and their wives, girlfriends, and children. The entire series is like that. What Griffin wrote was not so much military fiction, but fiction about people who are in the military. Griffin’s novels are light on action, as novels set in global conflicts go. There are, in fact, quite a few W.E.B. Griffin novels in which not much seems to happen.

But when he was at his best, Griffin wrote engaging characters that drew you in to the story. I’m working my way eagerly through the Brotherhood of War books. Many readers have gone before me, and many more are sure to follow.

When he was not at his best, Griffin’s books tended to ramble. Griffin was most on-point when he wrote stories set narrowly within the US military. When he strayed beyond that, he sometimes seemed to lose the plot.

Speaking of plot: I may be wrong, but I would be willing to bet that Griffin was a discovery writer—that is, he did not compose from an outline, but simply wrote down the story as it came to him. This kind of writing makes for memorable characters, but occasionally ersatz and meandering plots.

The consumption of alcohol is a big part of Griffin’s stories and characters. I’m not talking about drunken bacchanals here, but simply the demonstrated conviction that a grown man must be properly lubricated with spirits at all hours of the day and night. This was no doubt a real part of the postwar military culture in which Griffin came of age.

Also, it’s very clear that Griffin never bothered with what are now called “sensitivity readers”. There is a scene in the The New Breed in which one of the characters actually describes a woman’s breasts as “knockers”. Regular readers of this blog will know that I loathe political correctness; but even I would think twice before using this word in an unironic manner.

W. E. B. Griffin (1929 – 2019) lived to within a few months of his ninetieth birthday. This is probably a wonder, as most photos of the author show him to be rather rotund, and smoking a big stogie.

After a childhood split between New York and Philadelphia, Griffin joined the U.S. Army in 1946. He therefore missed World War II; but he was involved in the military occupation of Germany. He also served in the Korean War.

Griffin was modest about his own military career, however. He once told an interviewer, “My own military background is wholly undistinguished. I was a sergeant. What happened was that I was incredibly lucky in getting to be around some truly distinguished senior officers, sergeants, and spooks.”

Nevertheless, the level of detail in Griffin’s military novels could only come from an author who has actually served in uniform. These books are extremely popular with veterans, as well as less qualified readers like me—who never served, and sometimes regret their failure to do so.

Most of the Brotherhood of War series was written during the 1980s (with the exception of the final installment, Special Ops, which came out in 2001). All of these books are still in print, however, and available on Amazon in multiple formats. Highly recommended to the veteran and nonveteran reader alike.

***View the Brotherhood of War series on Amazon***