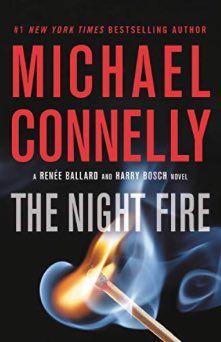 I’m reading Michael Connelly’s latest, The Night Fire, and it’s pretty good so far. (I’m about 2/3 through the book.)

Like most Michael Connelly fans, I love the Harry Bosch novels. I’ve read every one of them.

The problem, though, is that Harry Bosch will be seventy this year. (Those of you who’ve read all the books have probably already done the math, too.) Bosch is a Vietnam vet and a Baby Boomer. He’s way past the age of a working detective.

Connelly has kept Harry Bosch active for so long (my guesses) because a.) Bosch has been a lot of fun for him to write, and b.) Bosch has been very lucrative, both for Connelly and his publishers.

But sooner or later, Harry had to retire. That meant that Connelly had to either find a new series detective, or revisit some of Bosch’s past adventures.

But the Bosch series has always been present-based, so I doubt that the second option was really an option. Connelly needed a new character…which brings us to Renée Ballard.

Renée Ballard is about as unlike Harry Bosch as she could be. She’s not only female, but also a Millennial. Whereas Harry was “old school” all the way, Renée Ballard shares the concerns of a stereotypical “woke” Millennial. (In the first Ballard novel, she scolds someone for accidentally misgendering a transgender crime victim.)

Part of Renée Ballard’s backstory is that she was sexually harassed by her former boss, Captain Olivas. This history, and the ongoing tensions between Ballard and Olivas, comprise a recurring element in the Ballard series so far.

The net result of all this is that the Renée Ballard novels have a very different feel than the earlier Harry Bosch novels. Connelly seems to be attempting to make the Ballard books at least partly focused on contemporary controversies. This was never a fixture of the Bosch books, which were apolitical police procedurals.

I have to wonder if the lingering presence of Bosch in these novels isn’t indicative of a.) Connelly’s discomfort in writing in the unfamiliar headspace of a Millennial woman, or b.) Connelly’s fear that longtime Bosch fans won’t “get” Renée Ballard.

Only Michael Connelly knows the answer to that one, of course.

I have to wonder, though, if the author really made a good decision in picking a Bosch replacement who is a.) three decades younger than him, and b.) of a different gender.

Connelly might have felt the conscious need to make his next character a non-white-male type. When the first Bosch novel was published in 1992, the racial, gender, and sexual identities of fictional characters weren’t seen as matters of life and death. But times have changed. Perhaps Connelly didn’t want to be seen as an older white male author who only wrote about older white male detectives. Perhaps his publishers put pressure on him in this regard.

I’m going to take a wild guess and suggest that Harry Bosch was—and is—far easier for Michael Connelly to write. The Renée Ballard books are still good, but sometimes the reader gets the sense that Michael Connelly isn’t having quite as much fun writing Harry Bosch’s successor.

I could be wrong, but that’s what my gut tells me—as both a reader and a writer.