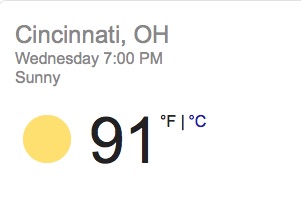 Heat waves past and present…

It’s been unseasonably warm in Ohio for the past week. Today the mercury hit 93 degrees for the high.

I’m familiar with the term “Indian summer”, but this is ridiculous. We’re having dog days of August weather, with Halloween just a few weeks away.

This isn’t the first miserable Indian summer in the Cincinnati area. I distinctly recall the hellish September/October of 1985. I was in my senior year of high school, and running cross country. There were a few races in which I was sure I was going to collapse from heat stroke.

Homecoming 1985, on October 12th, I remember sweating in my suit and tie at the big dance.

Why I am telling you this (other than my natural tendency toward nostalgia)? This late-season heat is a bit unusual. But if we had October heat like this 34 years ago, then the world probably isn’t ending (though you never know, of course).

According to the forecast, things are supposed to cool off here tomorrow evening. And not a day too soon.