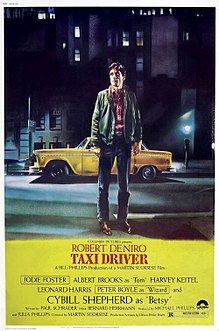 Watching Taxi Driver (1976) had been on my to-do list for quite some time, and tonight I finally checked it off.

This was, first of all, a very dark film about the psychological and social malaise of post-Vietnam America during the Sickie Seventies. The film is set in New York, which—by all accounts—was truly a hellhole during that era.

Robert DeNiro stars as 26 year-old Travis Bickle, a troubled Vietnam vet with obvious psychological issues. Travis takes a job as a nighttime taxi driver as an antidote to his persistent insomnia.

Early in the movie, Travis meets Betsy (Cybill Shepherd). Betsy is a volunteer for the campaign of Charles Palantine, a surging candidate for President of the United States. Travis’s approach is a bit odd. But Betsy admires his spunk, and agrees to join him for coffee and pie.

At first it seems that Travis may find happiness with Betsy. But when he takes her out for a movie, his choice is very…inappropriate second-date fare. Disturbed by the date, Betsy stops taking his calls.

Travis also befriends Iris (Jodie Foster), 12 year-old prostitute. (Yes, really.) Although he has an opportunity to sexually exploit her, Travis only wants to save Iris from her life on the streets and her manipulative pimp.

How does it all shake out? I’m not going to tell you—just in case you haven’t yet seen the movie.

Taxi Driver is a good movie, but it’s a dark and depressing ride through nearly two hours of mid-1970s social decay, and the mind of an extremely disturbed young man. This is no John Wayne movie. Travis is an antihero; but there is enough good in him to maintain him as a sympathetic character.

Taxi Driver is also a film that would never get made today. The content in this movie would generate a long list of twenty-first century trigger warnings and speech code violations. Most shocking to present-day viewers (and this was even a boundary-pusher for me) was the blatant depiction of child prostitution. There is no underage nudity or sex scenes between adults and minors. Nevertheless, Jodie Foster would have been about thirteen when this movie was made. Though all the really bad stuff is merely implied, it would be a bit too close for comfort for today’s moviegoers. One can only imagine the outcry on Twitter.

Anyone who was alive in 1981 will know the historical significance of Taxi Driver. This was the movie that stoked John Hinckley Jr’s obsession with Jodie Foster, and gave him the idea of assassinating a president in order to impress her.

Hinckley originally planned to assassinate Jimmy Carter. But Carter left office before Hinckley could make a serious attempt. So Hinckley shot Reagan in Washington D.C. on March 30, 1981. (I can still remember hearing the news from a childhood friend’s mother; but that’s another story for another time.)

By all means, watch Taxi Driver; but realize that it will give you a mental hangover for a few hours. Although the ending is not entirely unhappy, this is not an uplifting movie.

But sometimes dark films can be worth watching, too. I believe this is one such case.