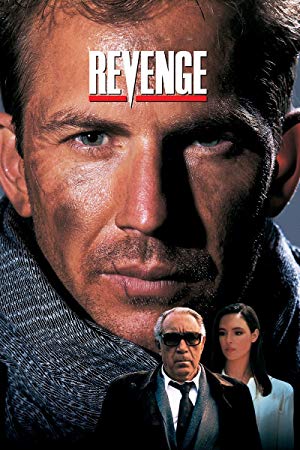 I hate to pan a Kevin Costner movie. But Revenge (1990) just didn’t live up to my expectations.

This is the setup: A jet pilot and Vietnam vet (Kevin Costner) retires and travels to Mexico, where he is the guest of an old (and much older) friend, Mendez (Anthony Quinn).

Oh, and Mendez just happens to be a Mexican gangster.

And the hero falls in love with Mendez’s comely young wife (Madeline Stowe).

Of course, the lovers are discovered.

And what do Mexican gangsters do when their wives are unfaithful? Nasty stuff.

That’s the first of half of this rather long (too long, really) movie. The second half of the film is vaguely reminiscent of The Count of Monte Cristo. It’s a revenge plot, as the hero embarks on a rather convoluted quest to exact retribution.

For the guys, there are lots of nude shots of Madeline Stowe. (I hate to be crude, but that’s really the only good thing I can see here.)

Costner, Stowe, and Quinn all put in competent performances. But they were working with a bad script. The story structure here is flawed. Revenge felt like two movies stitched haphazardly together.

Not everyone agrees with me, of course, though. You can watch Revenge on Amazon, and decide for yourself. (The film actually has a rather high rating average.)