The mainstream media has noticed an uptick in doomsday predictions since the COVID-19 pandemic became an acute issue in the United States, and the rest of the English-speaking world.

Of particular notice these past few days is Silvia Browne’s prognosticating volume,  End of Days: Predictions and Prophecies About the End of the World.

Browne’s book, published in 2009, had previously been languishing somewhere in the midlist (which is expected for a book published a decade ago). 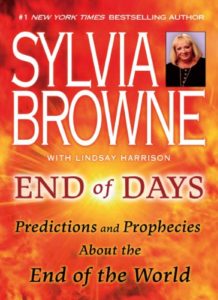 How did that happen? Well, isn’t it obvious—the coronavirus pandemic.

But wait: It gets better. Apparently, End of Days contains a prediction that bears an uncomfortable similarity to the current COVID-19 global outbreak:

“In around 2020, a severe pneumonia-like illness will spread throughout the globe, attacking the lungs and the bronchial tubes and resisting all known treatments,” it said. “Almost more baffling than the illness itself will be the fact that it will suddenly vanish as quickly as it arrived, attack again ten years later, and then disappear completely.”

Silvia Browne claims that she began receiving premonitions at the age of 5. Make of that what you will.

It is worth noting that Browne’s book isn’t the only old title to become the target of renewed interest in recent days. A 1981 novel by Dean Koontz also contains plot elements that are eerily similar to the coronavirus outbreak. (Koontz’s book even mentions “Wuhan”. Creepy, huh?) And what about Stephen King’s post-apocalyptic novel of the “superflu”, aka “Captain Trips”? The Stand, originally published in 1978, is now #13 in fiction in the Amazon Kindle Store. Meanwhile, the 2011 movie Contagion, a film about–you guessed it—a civilization-destroying flu, is the most watched movie on Amazon.

King, Koontz, and the makers of Contagion never claimed to be prophets, of course. Nevertheless, in times like these, the End of the World is on people’s minds, and so there is an appetite for such fare. And where there is demand, there is eventually supply. Mark my words: Before this is over, some YouTube preacher or psychic will gain 15 minutes of fame for loudly predicting that the coronavirus is the death knell of civilization.

The problems with predictions

There are problems with such predictions, of course. First of all, the pandemic is nothing new. Civilization has been through many pandemics, dating all the way back to ancient times. An unnamed pandemic threw the reign of Byzantine Emperor Justinian into disarray. (Justinian himself caught the plague, but he recovered.)

Plague also battered the Romans, and before that, the Ancient Greeks. A plague in Athens was a major factor in one phase of the Peloponnesian War.

There was the Black Death in the 13oos in Western Europe, but that wasn’t the only plague to strike pre-modern Europe. Shakespeare wrote several of his most famous works while…quarantined for the plague.

Early American history is marked with outbreaks, too: typhoid, cholera, smallpox. More Civil War soldiers, on both sides, died from communicable diseases than from battlefield wounds.

There have been no such pandemics in living memory, but there was a catastrophic one in the 20th century, barely a hundred years ago. The Spanish Flu (H1N1) pandemic of 1918-1919 killed 50 million people worldwide. That same pandemic killed 675,000 in the United States.

This would mean deaths of over 2 million in terms of today’s US population. No one in the scientific community is predicting a coronavirus death toll even close to that number.

But what about Silvia Browne’s seemingly on-target prediction of “a severe pneumonia-like illness” that sweeps the globe “in around 2020?” Browne made that prediction in 2009, I’ll remind the reader.

Here’s a guess: Perhaps Browne read Dean Koontz’s 1981 novel, which reportedly has a similar plot line. (That actually isn’t as unlikely as you might think; Dean Koontz has sold a lot of books over the years.)

Let me give you some inside baseball here—which will help put your mind at ease regarding all these prophesies of doom, and their eerie semblance to current events.

I write fiction, both thrillers and horror.  Every time I sit down to write a new novel or short story, I try to be as original as I can. (I succeed, most of the time, I think.) But I know that certain story elements tend to be common over certain genres.

Now suppose that you’re going to write a story (or make a prediction) about the End of the World.

Here, too, you have some obvious elements to work with. Without resorting to  supernatural or extraterrestrial causes, your end-of-it-all plot is probably going to involve one of the following:

Are there any others? Not that I can readily think of. Zombies? No, that’s supernatural. What about a collapse of the Internet or the power grid? That would certainly be disruptive, and some people would die as a result, but it wouldn’t be apocalyptic.

Also remember that there were some viral outbreaks in the 2000s, that were points of serious concern for a while, but which eventually went away, like the Avian flu outbreaks of 2003~5.

So, to have predicted in 2009 that a “pneumonia-like illness” would baffle scientists and take thousands of lives ten years hence would not necessarily have required psychic powers. That’s all I’m saying.

If you’ve ever read your horoscope, or maybe the little slips of paper inside Chinese fortune cookies, you’ll notice a trend: Most purportedly psychic predictions of the future rely on general, widely applicable statements (“You are coping with a broken heart,”) or extrapolations based on past data.

Finally, I should note that I am not one of those snide, debunking New Atheist types. I believe in God…also in an afterlife. I’m open to elements of the paranormal. (Hey, I wrote a novel about a haunted road in rural Ohio, after all.)

But I believe that faith, or the openness to possibilities, must be tempered with healthy skepticism. I was raised Roman Catholic. But if someone tells me that the image of the Virgin Mary can be discerned in the mold on their shower curtain, I’m going to require a lot of evidence before I declare it a miracle.

And so should you maintain your skepticism, when prophets of doom predict the end of the world. Especially in times like these.