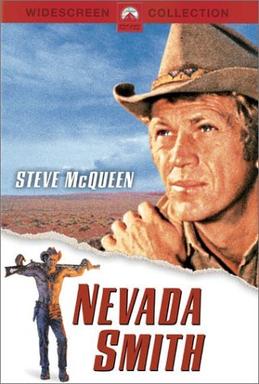 In 1966, the war in Vietnam was already a major concern for most Americans in real life. The tumultuous year of 1968 (also the year of your humble correspondent’s birth) was fast approaching. The golden, innocent era of postwar America was drawing inexorably to a close.

But Hollywood was still cranking out westerns. The Great American Western, too, would be killed by the societal upheavals of the 1960s. After that decade, American audiences were no longer as willing to embrace the straightforward notions of good and evil, heroes and villains, that typified the western movie. Make of that what you will.

But Hollywood was still cranking out these movies in 1966. In that year, Nevada Smith, starring Steve McQueen, hit the theaters. (The movie hit my cable box last night, fifty-three years later.)

Nevada Smith employs a classic revenge plot. Max Sand (aka Nevada Smith) is the son of a white father and a Native American mother. During his youth, both of his parents were brutally murdered in a crime with vaguely racial overtones. Now an adult, Max sets out to track down the killers and avenge his parents.

This is an entertaining film. The main character goes on a long quest to fulfill his aims, and that presents numerous opportunities for plot twists, and a colorful array of secondary characters. I suspect, though, that at 128 minutes (a little more than two hours), Nevada Smith would have to be cut down for twenty-first century moviegoers, who are now so accustomed to peripatetic superhero flicks.

If anything detracted from Nevada Smith, it was the film’s lack of realism, which was simply taken for granted by moviemakers and moviegoers alike prior to the 1970s. To cite one example: when characters are shot, they simply grab their chests and keel over. This may have spared 1960s audiences blood and gore, but it also required a lot more suspension of disbelief.

Nineteen sixty-six was not a “woke” year (no one back then would have even known the term), nor is Nevada Smith a “woke” movie. That said, the film’s portrayal of Native Americans, and various mixed race people, is sympathetic and respectful. (I have no doubt, though, that today’s PC crowd would watch the film and find something to carp about. Don’t they always?)

Steve McQueen died in 1980 at the age of 50. Nevada Smith represents one of his better performances. Worth a watch if you like classic westerns.