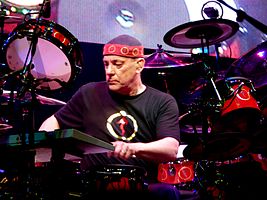 I found out yesterday that Neil Peart, the drummer and primary lyricist for the Canadian rock band Rush, passed away earlier this week at the age of sixty-seven.

Rush was formed in Toronto in 1968, the year I was born. The group’s debut album came out in 1974. Rush made its last studio album in 2012, and continued touring intermittently through 2018.

In the thirty-eight years between the release of that first album and the last tour, Rush never achieved the universal recognizability of Elvis, the Beatles, Michael Jackson, or Taylor Swift. There are plenty of people who don’t know what Rush was. (I think it’s safe to say that everyone has heard of the Beatles by now.) But since the 1970s, there have been millions of Rush fans; and most Rush fans are fans for life.

I discovered Rush in the fall of 1982, shortly after the band’s Signals album came out. I was a freshman in high school (an ideal age to discover Rush) and I was immediately hooked.

Right away, I could tell that Rush’s music was “different”. This brings us back to Neil Peart. Peart will be remembered as a virtuoso drummer, but he will also be remembered for his lyrics. Peart wrote the lyrics of almost all the songs Rush performed.

Neil Peart did not write sappy love songs, or hard-driving tributes to rock-n-roll. He wrote songs that got you thinking about the “big issues”.

By this, I don’t mean to imply that Peart wrote the sort of ham-fisted “message art” that has become such a staple in the culture wars of the twenty-first century. His songs sometimes took a stand; but they also left room for personal interpretation and ambiguity (which is what good art usually does.)

And sometimes he contradicted himself. For example, the song “Freewill”, from the album A Farewell to Kings, strongly implies an atheist mindset. But in a subsequent song, “Mystic Rhythms”, Peart suggested that maybe there really is something out there, a side of reality that human rationality cannot fully grasp or comprehend.

In a tribute to Neil Peart published yesterday, National Review’s Kyle Smith wrote, “Peart was a genius at tapping into the restless alienation of late-teen boys who think they’re smarter than everyone around them.”

There is something to that. Neil Peart’s body of work offers something for everyone; but his songs seemed to particularly resonate with a certain kind of male who came of age in the 1970s and 1980s.

My teenage years were basically happy; and my high school experience was mostly positive. Nevertheless, there were times when I did feel alienated from both my peers and the adults in my midst. When you were a teenage boy who felt like the rest of the world was out-of-touch, Neil Peart was able to perfectly channel your angst with songs like “Tom Sawyer” and “Subdivisions”.

But Neil Peart’s songs were by no means one big tub of sour grapes. On balance, there was more aspiration than alienation in his lyrics.

One of my favorites, “Marathon”, perfectly captures the enthusiasm of the long-distance runner. I ran cross country during my last two years of high school. (That was the only sport I was ever any good at.) When I heard “Marathon” for the first time in the fall of 1985, I was blown away. I couldn’t believe it: Neil Peart had written my personal sports anthem, it seemed.

I wouldn’t be the first teenage boy of the Reagan era to say that Rush’s songs, and Neil Peart’s lyrics, formed the soundtrack of my life during that period. But I’m going to say it here, nonetheless, because that’s more or less the truth.

But Neil Peart wrote about more than abstract ideas and feelings. His songs weren’t exactly educational, in and of themselves. (That would have been asking for too much from rock music—even from Neil Peart.) But many of them were intellectual gateways.

Among the references in Peart’s lyrics are: the philosophy of Ayn Rand (“Anthem”, “2112”), the epic poetry of Samuel Taylor Coleridge (“Xanadu”), Greek mythology (“Hemispheres”), the French Revolution (“Bastille Day”), and the development of the atom bomb (“Manhattan Project”).

As a teenage boy, listening to this music, I often found myself digging into reference books, so that I could better understand what Neil Peart was talking about.

And this formed another, equally important side of Peart’s music: While he wrote songs that were perfect accompaniments to adolescent navel-gazing, he didn’t stop there. He also wrote songs that pointed you toward a much bigger world, and much greater concerns, than those of your teenage microcosm.

Our artistic tastes and intellectual discernment change over time, of course. As an adult, some of Neil Peart’s songs strike me as a bit pretentious. Or at the very least, he was tackling themes and ideas that couldn’t be adequately covered in five- to seven-minute songs.

Here’s one example: In 1985, I first heard the song “Territories”, in which Peart seems to condemn any form of nationalism. At the age of 17, that song struck me as incredibly profound. Today, the same song strikes me as a simplistic appeal for a borderless world—which I don’t believe to be realistic. The real world is far more complicated than that.

But “Territories” got me thinking, at the age of 17, about issues beyond my day-to-day concerns. Would I have gotten that from Michael Jackson or Bon Jovi? I think not.

Moreover, Neil Peart wasn’t writing songs for the 51 year-old I am today. He was writing for the teenager I was then.

Peart said in a Rolling Stone interview (quoted in Kyle Smith’s article): “I set out to never betray the values that 16-year-old had, to never sell out, to never bow to the man. A compromise is what I can never accept.”

At the age of 51, I can’t necessarily make the same claim. I’ve made plenty of compromises, and bowed to the man more times than I can count.

There will be no more Neil Peart songs. But I’ll always treasure what remains of his music.