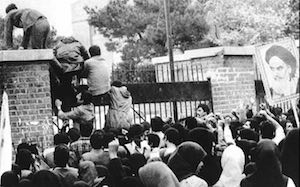 CNN reports that in the wake of fresh tensions between the Iranian government and the United States—including an Iranian missile launch at US positions in Iraq—some Iranian university students have had difficulty gaining entry to the U.S.

Cry me a river.

Let’s cut the B.S. for a moment here. For the last 40 years, the U.S. and Iran have been in a state of undeclared war. The present Islamic Revolutionary government opened the hostilities, when the Ayatollah Khomeini’s minions overran our embassy in Tehran in 1979, and took 52 American diplomats hostage for 444 days.

Since then, Iran’s behavior has been consistently provocative. Iran has carried out terrorist attacks throughout the Middle East, and was behind a devastating car bomb attack on US Marines in Beirut in 1983.

It is, frankly, astounding that a.) Iranian youth want to study in the heart of the Great Satan in the first place, and that b.) we admit individuals associated with a government that so openly wishes for our destruction, and that backs up those intentions with actions.

There are universities in Iran for these young people to attend. And that has long been the case. Iranian university students were a major force behind Khomeini’s rise to power in 1979.