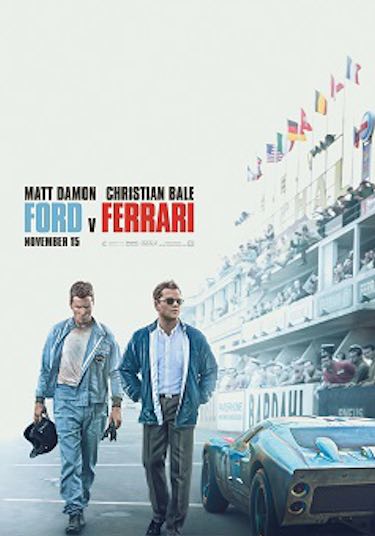 It’s been a while since a movie has grabbed me from the opening scene, pulled me in, and not let me go for more than two hours. That’s exactly what happened, though, when I watched the sports drama Ford v Ferrari, which lasts for an enthralling 152 minutes.

Here’s the setup, based on a true story: In the early 1960s, Ford Motor Company is stuck in a sales and image slump. Henry Ford II, the grandson of the company’s founder, charges vice president Lee Iacocca (played by Jon Bernthal) with bringing home a victory for the Ford racing team in the annual 24 Hours of Le Mans race in France.

Iacocca initially approaches Ferrari founder Enzo Ferrari about a Ford-Ferrari partnership. (Ferrari was the reigning corporate champion of auto racing in Europe.) But after a humiliating refusal from the Italian CEO, Iacocca must build an American team that can bring Ford’s new GT40 race car up to the task. Oh, and he also needs the right driver for the Le Mans.

This leads him to California, where he enlists the talents of performance car designer Carroll Shelby (Matt Damon). Shelby is a brilliant designer, but his company is struggling financially, so the contract with Ford is a godsend.

And Shelby knows just the right driver for the race: Ken Miles (Christian Bale), a decorated World War II British bomber pilot turned racer. Miles has an instinctive understanding of every nut and bolt in a race car. He’s difficult to work with, though. In an early scene, Miles hurls a wrench at Shelby. In another scene, he sucker-punches him. And Shelby is his chief benefactor.

According to the Wikipedia article about this film, Brad Pitt and Tom Cruise were initially envisioned for the leading roles. We can be grateful that didn’t happen. Matt Damon’s portrayal of Carroll Shelby is almost uncannily perfect. Bale, meanwhile, is simultaneously frustrating and sympathetic as the self-sabotaging Ken Miles.

The only miscast character is that of Lee Iacocca. Jon Bernthal has his talents. He’s perfect as the charismatic villain or antihero. But he isn’t convincing as Lee Iacocca…He certainly isn’t convincing to those of us who are old enough to remember Iacocca as the celebrity CEO of Chrysler during the 1980s.

Ford v Ferrari is a corporate drama as much as a sports drama. Shelby and Miles must contend with the erratic personality of Henry Ford II, and the behind-the-scenes scheming of Ford executive Leo Beebe, who takes an instant disliking to Miles. This is a classic story of the brilliant conformists against the bean-counting, bureaucratic “suits”.

This movie is worthwhile for the racing scenes alone. During the final portions of the big race, you’ll feel like you’re riding in the GT40 with Miles. I certainly did. But that’s just a bonus, really. This movie is an example of excellent storytelling coupled with (mostly) excellent casting.

Ford v Ferrari is a welcome break from the endless superhero and Star Trek films that Hollywood can’t seem to stop churning out like widgets. Also, here we have a car movie that doesn’t involve Vin Diesel pulling off an improbable heist. Every Hollywood film nowadays seems to have 13-years as its target audience. Not this one.

Speaking of which: Ford v Ferrari is a movie for adults. No—there is no sex or violence to speak of. But in order to “get” this movie, you need to have a rudimentary grasp of the automobile industry and its history during the twentieth century. This is an intelligent film. And for that reason, it won’t appeal to everyone in the mass market. Probably not your 13-year-old.