But it’s in the Internet archive:

Twitter Is The Worst Company On Planet Earth. Here’s How To Bet Against The Stock—and Deactivate Your Account

“Twitter is a faux-tech outfit with no competitive moat and a customer base filled with—it would seem—idiots. It’s too small to be considered Big Tech, but the media has given it outsized influence. Only you and I can fight that war and destroy Twitter’s base. So, delete your account, and short the stock. Making money while doing the right thing feels extra good…doesn’t it?” 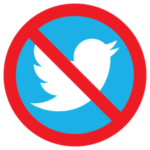 Although all of the mainstream social media companies have become speech tyrants in recent years, some of them have had their uses.

I won’t deny that I’ve had fun surfing YouTube videos over the years. I am grudgingly grateful to Facebook for enabling me to reestablish contact with long-lost friends from the 2000s, 1990s, 1980s, and 1970s.

But Twitter is always a ride through a toxic cesspool.  I never liked it, even before the most recent controversies.