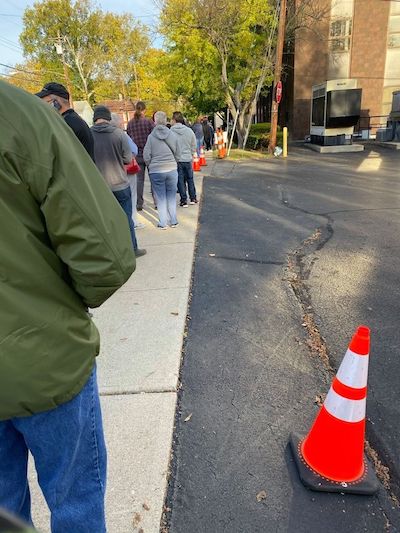 Early voting in Ohio began on October 6. I figured that if I gave it a week, the crowds would thin out, right?

Boy, was I wrong.

I showed up today to vote, and this was the line.

Overall, it wasn’t too bad. Mid-October is one of the few genuinely pleasant seasons in Ohio: cool crisp mornings, and balmy afternoons. If you have to spend some time standing on a sidewalk in the Buckeye State, this is an ideal season in which to do so. I was at the polling location for about an hour, from the time I took my place in line, until I left, my ballot entered.

I live in semi-rural Clermont County, east of Cincinnati near the Ohio River. My early voting location was in the county seat of Batavia, about twenty minutes from my house.

The poll workers were friendly and did their best to keep the line moving. But the volume of early voting this year clearly stretched the infrastructure. If you’ve been following the news, you’ll know that the situation is much the same throughout the country.

I don’t know who is going to win the election. But as I’ve previously stated, I do not believe that any poll, carried about by any organization, is capable of accurately predicting the outcome on November 3rd.

Not this year. There are simply too many variables. That’s why it’s important to vote.

I’m glad that I can now check this task off my to-do list.

Less than three weeks until Election Day. It will all be over soon.