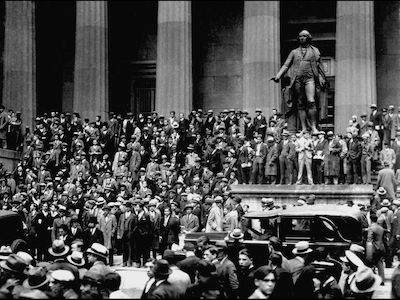 This was the Crash. Investors on the NYSE lost $14 billion ($206 billion in 2019 dollars.) Over the next four days, total losses would balloon to $30 billion.  You do the rest of the math…

I don’t remember Black Tuesday or the Great Depression, of course. Those who can are now a dwindling number.

But I do remember some of those who lived through it.  I heard about the Great Depression secondhand.

My grandparents often talked about life during the Great Depression years.  As my grandfather explained it, “You didn’t really consider yourself poor, because everyone around you was poor. Your cousins were poor. Your neighbors were poor.”

My grandmother maintained what the family jokingly referred to as “Depression mindset” through the end of her days. She was very frugal, and very much a hoarder…You know–the kind of person who reuses every glass jar, and buys tea bags in bulk because they’re cheaper that way.

Depression mindset is completely alien to those of us who were born in a time and place of greater abundance.

Reuse a glass jar? Heck, we think our iPhones are “old” after we’ve been using them for two years.

Whether that’s a good thing or a bad thing…well, I’ll leave that one up to the reader.