The American Civil War is an obsession for some history buffs. While you won’t catch me passing my time on the weekend participating in any Civil War reenactments, I do enjoy reading about the conflict and its aftermath—that period in American history known as Reconstruction.

I’ve read James McPherson’s Battle Cry of Freedom, and Eric Foner’s classic, Reconstruction: America’s Unfinished Revolution. Both of these titles are excellent and well worth your time.

I like to read novels that a short, economical, and fast-moving. By contrast,  I love big, thick history books.

I’m talking doorstops. I like history books with maps, and generous photo sections in the center. History books in the 500- to 800-page range.

Working my way through a thick history book provides a certain kind of satisfaction. It makes me feel like a college student again.

There is one history text, however, that even I found formidable for a long time, because of its scope. I’m talking about Shelby Foote’s The Civil War: A Narrative. This three-volume set is almost 2,600 pages long. Shelby Foote (1916 – 2005) began writing it in 1954. The first volume in the set was published in 1958. The third volume came out in 1974. So this gargantuan project consumed two decades of Shelby Foote’s life.

I first became aware of The Civil War around 1995. I was on a flight from Atlanta to Cincinnati,. The passenger in the seat next to me was reading the third of the three volumes. Since I have long been inquisitive about other people’s reading habits, I asked him about it. My fellow passenger spent the next fifteen minutes rhapsodizing about Foote and his writing. Then he went back to his reading. I left him alone for the rest of the flight. 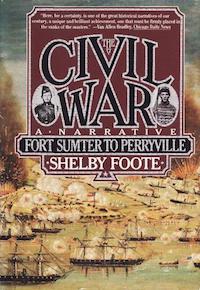 I didn’t purchase the books right away, but they remained in my mind. Then I bought the three-volume set on Amazon about a decade ago.

I kept putting off reading the books, however, because I was concerned that reading them would require two decades of my life.

I’m exaggerating, of course. Nevertheless, a three-volume, 2,600-page text does represent a major time commitment. Also, there is an opportunity cost involved. In the time that it would take me to read a 2,600-page work, I could read as many as six or seven shorter books.

Nevertheless, Shelby Foote’s Civil War books had been mocking me, all these years, from their place in my home library. Now that I’m quarantined (along with the rest of the country), I recently decided to start reading the first volume, at long last.

Wow. Foote’s nonfiction historical writing reads like a novel. You fall into it, and you don’t want to come up for air.

When Foote began writing his magnum opus in 1954, television was still a novelty. When the last volume came out in 1974, there was no Internet, and still no cable television as we know it today. (I don’t think VCRs were even common yet in 1974.)

Attention spans were longer. People still liked to sink their teeth into big, thick books with plenty of meat on the pages.

Foote’s writing has meat. Every page is filled with little nuggets and asides that you’re unlikely to find in shorter texts. If you are ready to immerse yourself in the American Civil War, these are the books for you.

Shelby Foote has become a subtly controversial character in this era of political orthodoxies. He was born in Mississippi and he died in Tennessee. Foote was a Southerner through and through.

“…I would fight for the Confederacy today if the circumstances were similar. There’s a great deal of misunderstanding about the Confederacy, the Confederate flag, slavery, the whole thing. The political correctness of today is no way to look at the middle of the 19th century. The Confederates fought for some substantially good things. States’ rights is not just a theoretical excuse for oppressing people. You have to understand that the raggedy Confederate soldier who owned no slaves and probably couldn’t even read the Constitution, let alone understand it, when he was captured by Union soldiers and asked, ‘What are you fighting for?’ replied, ‘I’m fighting because you’re down here.’ So I certainly would have fought to keep people from invading my native state.”

I’m about two hundred pages in, and I don’t detect any real Southern bias. If it’s there, you would really have to look for it. (This is mostly a military history, not a history of the causes behind the Civil War.) But in this regard, Foote parts ways with McPherson and Foner, whose pro-Union sentiments are apparent even in the titles of their books.

I should also reemphasize (as if it weren’t clear already) that this is not The Civil War for Dummies. Likewise, if you’re looking for a book to “cram” for an American history final that covers the conflict, this is not your book—or books.

In fact, I would recommend Shelby Foote’s 3-volume set only for the reader who is already somewhat familiar with the names and events of the war. By this I don’t mean only Grant and Lee (everyone knows them!), but also John Bell Hood, Albert Sidney Johnston, and Jubal Early. When you hear the names Chancellorsville and Shiloh, do you immediately think of Civil War battles? If that’s you, then you’ll enjoy these books. Otherwise, you might want to start with the McPherson text—which, though long enough, is a bit more accessible.

The Civil War: A Narrative, is history for history lovers. And if you love history, you don’t want “just the facts”. You want a narrative, and a deep, richly woven one—which is exactly what Shelby Foote spent twenty years of his life creating. Now, fifteen years after his death, history lovers continue to appreciate the fruits of his long labors.